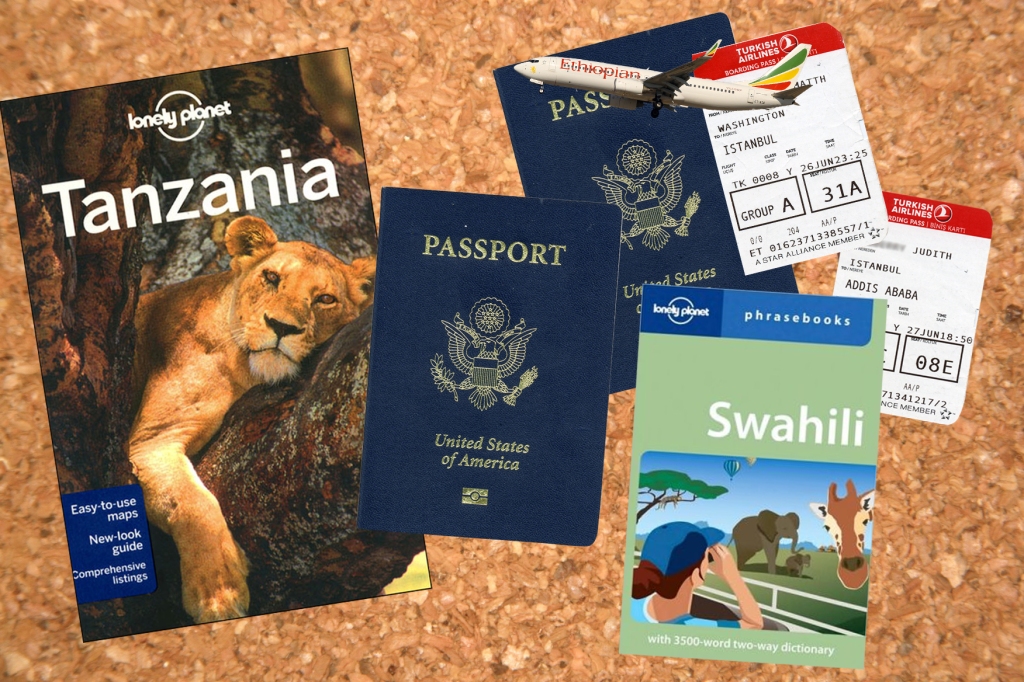 It’s amazing how all the excitement associated with starting a new travel adventure can be completely squashed by the airline industry. Whoever said “Getting there is half the fun” was definitely not talking about boarding commercial aircraft. Word to the wise: ALWAYS pack a spare set of underwear whenever you take a multi-stop international flight.

After months of planning, training and anticipation, we eagerly awoke in Chicago at 3 am to catch our crack-of-dawn United flight to DC. From there, we were to change planes and fly on Ethiopian Air to Addis Ababa and then on to Kilimanjaro Aiport (JRO) in Tanzania, our final destination. As luck would have it, an ill-timed thunderstorm centered over Chicago would quickly derail all of that. Lightning and pelting rain prevented the plane from loading and fueling just long enough (2+ hours of sitting on a boarded plane waiting to push back from the gate) to strand us at Dulles for over twelve hours.

As soon as we landed in DC, we raced to the gate (all those training runs up Mt. Trashmore in Evanston really came in handy), only to find that our flight departed mere minutes before our arrival. That in itself might have not been so bad, if rebooking our flight hadn’t been a 4-hour, ulcer-inducing experience. As students of the “Amazing Race,” we knew our next move would be to get to the United Customer Service counter as fast as humanly possible to find another route to JRO. Our agent was helpful, patient and willing to try every last option to get us to Africa, but, in the end, we spent a mind-boggling four hours standing at the counter before finally getting confirmed seats on a Turkish Airlines flight that would stop in Istanbul and Addis Ababa before getting us into Kilimanjaro at 4 am two days later. Literally, standing at a counter working with a gate agent to rebook to Kilimanjaro took 4 hours to complete. Highly undesirable, mate!

The bright side of all this, of course, is that our trip could only get better from here, right?

WRONG! As it turned out, we had a mere 35 minute connection in Addis which was trimmed to 20 minutes after a late departure. We landed just after midnight and got off the plane as quickly as possible only to find a bus waiting to ferry passengers to the airport proper. Once filled, we were relieved to get moving, but we couldn’t believe it when the bus stopped after only ten meters at the entrance to the terminal. We could have walked faster! As we sprinted up the stairs, looking for any information about our flight, we discovered we were in the wrong terminal. So we raced through security, dashed down the stairs to catch the transfer bus, only to find nobody there. Frantically, we flagged down a ground staff crew member who happened to be in shouting distance. He grabbed some keys, jumped in a small bus and personally sped us to the Ethiopian Airlines plane waiting on the tarmac.

As we approached, the plane crew was removing the boarding stairs. The driver honked his horn as we waved frantically to get their attention. Believe it or not, they actually stopped and let us on board. We eagerly asked if this was the flight to Kilimanjaro, but our hopes were dashed when the flight attendant asked “Where are your boarding passes?” We, of course, had not checked in and replied that we had none. We pulled out our itinerary hoping it would suffice. We finally caught a lucky break because he shrugged his shoulders and told us to take a seat anywhere we wanted. Breathless, we collapsed in the first row of seats, just as the safety demonstration began. It was like something out of Indiana Jones. You gotta travel all the way to Ethiopia for an experience like that. Just saying…

So that was the end of the worries, right?

WRONG AGAIN!!  With such a tight connection it was no surprise that our bags failed to join us on this final leg. We would have loved to been more relaxed about it, but after 42 hours of travel and 4 different flights, patience was running thin. Plus our entire trip depended on the gear in those bags. Luckily, we were reunited with them nearly 14 hours after arriving in Tanzania.

Can you say clean underwear?