Well, I am not sure if we have ever mentioned this before, but, for the past three years, Matt and I have been living with the “Curse of the Cat.”

You see, the summer of 2010 was the last time that we went on safari. South Africa was hosting the World Cup, and Matt, a total soccer nut, had a burning desire to attend the World Cup in person. Me? Not so much. But knowing there would be an opportunity to combine soccer with safari, I happily agreed. We flew to Johannesburg, rented a car, caught a few early-round matches and then spent the rest of the summer on a self-drive safari in South Africa and Namibia. 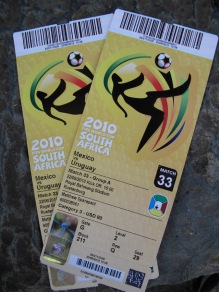 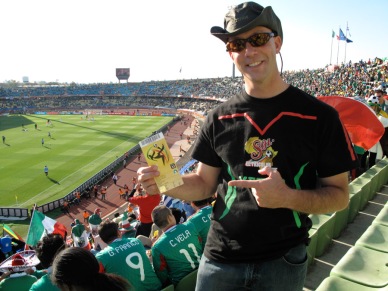 A self-drive safari might sound intimidating, but it really couldn’t have been any easier. There are just a few very basic but extremely important rules that are necessary to follow: 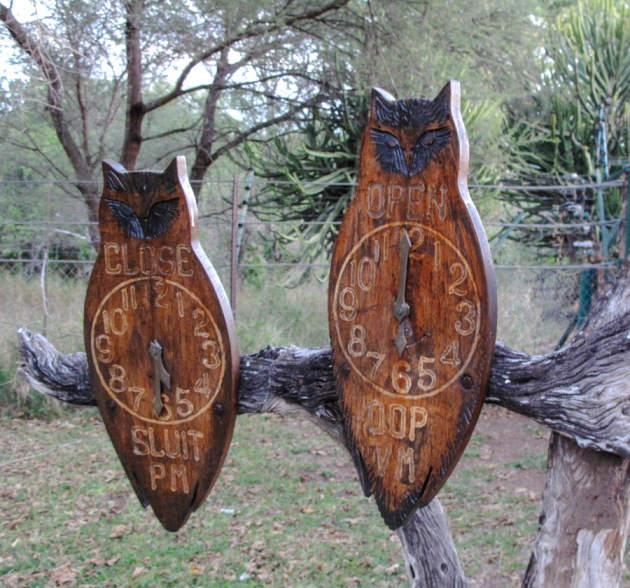 That summer was glorious. To this day, it ranks up there as one of the best trips we have ever taken. It was that getting-into-camp-on-time rule that got us in trouble…

For the first night of our self-drive safari, we had booked a bungalow at Letaba Camp in the central section of Kruger National Park. We knew we had to arrive before dark, but, for some reason, we didn’t calculate how long we should expect the drive from Joburg to take. With a total of twelve nights in Kruger, we wanted to stock up on all the supplies we would need before getting into the park. Countless pitstops ensued before we finally made it to the Phalaborwa Gate where we took care of the endless paperwork required to enter the park.

By the time all was said and done, we had exactly one hour to drive the 51 kilometers to Letaba Camp. We were told that we must drive at the maximum speed limit (50 km/hour) and that we were not allowed to stop for ANYTHING that we might come across.

About two minutes into our drive, we ran into an elephant bathed in beautiful golden light. It was in the middle of the road, so the only reason we have this photo is that we had to slow down to let it pass. Taking this photo only cost us a second or two, I swear. 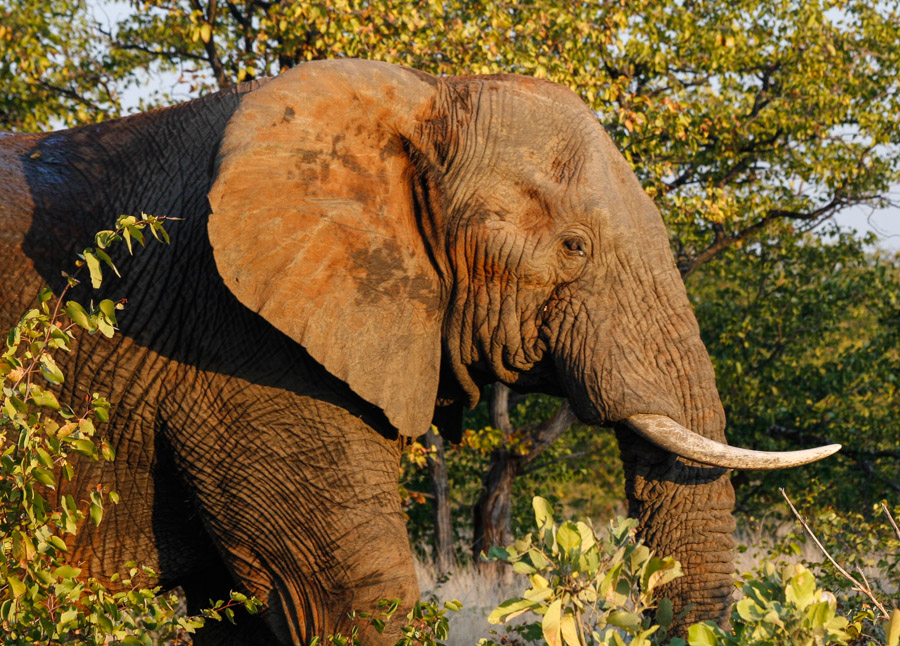 A few minutes later, we encountered a slow-moving herd of  buffalo parked in the middle of the road. Anytime we tried to pass, they would respond by giving us the stink eye. We had no other choice but to wait for the ornery bovines to move on.

We had only been on the road for a few minutes, but we were already in trouble. Although it was smooth sailing for the rest of the drive, there was no way we could drive the speed limit and still make it to camp on time. Sweating bullets, we drove at top speed for the rest of the way. We managed to make up a minute or two, but just before reaching camp the worst-case scenario for two animal-loving, nature photographers occurred.

We could see a large animal walking along the road ahead of us in the same direction that we were traveling, but, since we were coming up on its backside, it was hard to figure out what it was. As we got closer, we slowed just enough to identify the creature. At first, all we could decipher was its color, a beautiful tawny-colored coat. Next, we noticed its long, black-tipped tail. Finally, its large mane came into focus, and we suddenly realized we were approaching an adult male lion.

The next ten seconds will forever run in slow-motion for me, as the realization of what we were seeing and what we had to pass up hit. We had never seen an adult male lion before, and here was one in his full glory walking in the middle of the road. We wanted nothing more than to stop and snap as many photos as the cat would allow, but we couldn’t risk arriving late to the camp.

In a synchronized motion, our jaws dropped to the floor, and a low, guttural and oddly-distorted “NOOOOOOOOOO!” emerged from somewhere deep inside. As we passed, our necks craned back a full 180° to watch the magnificent creature until it finally stepped off the road and disappeared into the bush.

What a nightmare! The only way that we could console ourselves was to think how promising this encounter was. If we could see a beautiful male lion so close to the road in just our first hour of safari, imagine what we had in store for the rest of our time in Kruger, right? Wrong.

We were dead wrong. By the time we arrived to Letaba Camp, the gate was already closed. The security guard was kind enough to let us in without issuing us a fine, but we were too clueless and pumped up from the drive to realize that he expected  baksheesh for letting us in late. He finally gave up on us and directed us to guest reception where our South African safari adventure got underway. As mentioned before, it was spectacular, with one major exception. Matt explains here:

That’s right, we didn’t have any other encounters with big cats for the rest of our time in Kruger. Eventually, we saw some lions sleeping way off in the distance and caught a quick glimpse of a cheetah on the prowl, but most of the time the big cats just seemed to elude us. Twelve days in Kruger National Park and no cats! It’s unimaginable.

Some might call it luck of the draw, but we don’t think so. As long-time cat owners, we know that male lion was deeply offended because we didn’t slow down to give him the proper respect he deserved. He is the King of the Beasts after all. Ever since that moment, we have been suffering from the “Curse of the Cat.”

So, as we entered the Serengeti, perhaps one of the best places in the world to see the big cats, we wondered if the “Curse of the Cat” would finally be broken. We prayed that three years would be sufficient penance for our mistake. Sure, the cat gods have thrown us a bone every now and then. We had an awesome day watching a cheetah feeding on a kill in Imfolozi in 2010, and we’ve already told you about seeing the tree-climbing lions in Lake Manyara on this trip. But for the amount of time that we have been on safari, we have had surprisingly few good cat encounters. 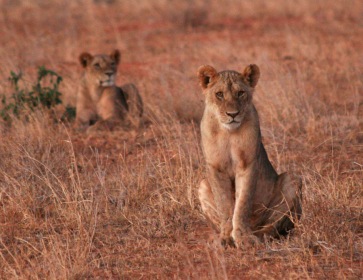 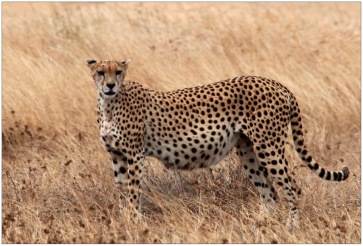 with a sample of what we have shot since: 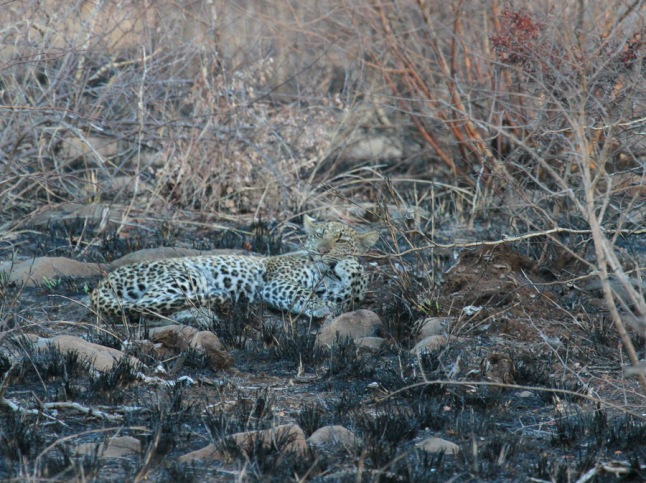 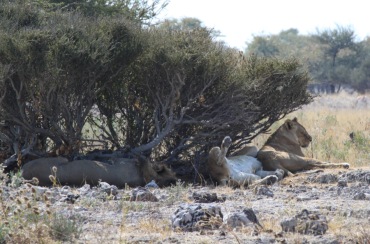 Would our curse finally be broken? Stay tuned to find out…

7 thoughts on “The Curse of the Cat”