When a lioness comes into estrus and is ready to mate, she and the pride’s dominant male will engage in a week-long love fest of sorts. Judging from the state of the royal couple we encountered, it just might have been Day 7 of their tryst. The two lovers looked exhausted, and the male had clearly let personal hygiene fall by the wayside. It was obvious that they weren’t enjoying each other’s company anymore, and they panted heavily as they rested between love sessions.

When the poor female tried to put some space between herself and her suitor, he sprung into action and chased her down to consummate their relationship yet again. The loud growls and snarls of the lioness made her displeasure obvious to all of us who were watching, engrossed in this amazing spectacle. Her oblivious suitor was not getting the hint that enough was enough—this lioness had one severe headache, and he just wasn’t going away.

As incredible as it was to witness the two cats mating, without a doubt, the best moment came when the deed was done. As soon as the male dismounted the lioness, she quickly distanced herself from her partner. The lion king stood alone for a few seconds looking rather pleased and proud of himself. Then, without so much as a yawn or a twitch of a muscle, the giant cat flopped from his standing position to the ground like a tree that had just been felled. Kachunk! If I had had any indication that that was going to be his next move, I would have shouted “Timber!” 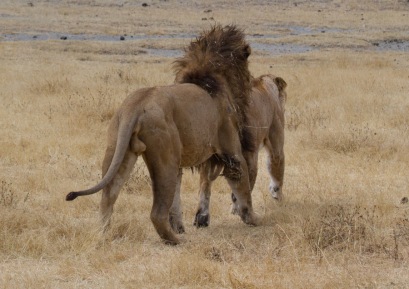 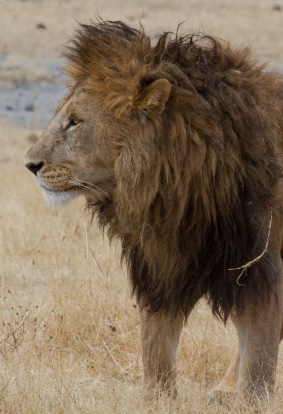 It was too funny, and the chorus of laughter erupting from the other safari vehicles that had converged on the scene just might have produced a Goodfellas “What? You think I’m funny? I amuse you”-kind-of-moment if the lion were a Scorsese fan and hadn’t been passed out cold. If that weren’t enough, I cracked up again when Matt, not missing a beat, proclaimed: “I know just how you feel, buddy. It’s exhausting trying to please these women!”