Matt and I were recently asked by our camera club to put together a travelogue program about our trip to Iceland in the summer of 2012. Even though that trip was almost two years ago now, it finally gave us the motivation we needed to process and edit the thousands of photographs and video clips we shot while we were there. We spent a lot of time working on our presentation and are really pleased with the final result, especially because it reminded us so much of what an amazing time we had traveling in that incredible little country. What a place! It’s hard to believe that a country the same size as Kentucky has so much to offer. You can see the highlights of our summer in Iceland in this short video:

This blog was born in Iceland, and we’ve come a long way since then. In our next series of posts, we will be sharing some of our best pictures, videos, and travel/photography tips in a way that we couldn’t when we were first posting from the road. We also hope to update some of those earlier posts with new and improved pictures and related videos to help give a better sense of what it was really like to experience Iceland.

To help get started, we thought we would begin with a post explaining some of the practical aspects of traveling in Iceland—you know, the basics of visiting any foreign country—how to communicate with the locals, what to eat, how to get around and where to sleep. We think this will be useful to anyone entertaining the notion of going to Iceland, but we also hope it will be enjoyable to those of you who just appreciate traveling vicariously. So here goes!

Speaking the Language
If you are worried about conversing with the locals, don’t be. Most Icelanders are fluent in English making communication a breeze, but you should remember that it is always considered good form to learn a few courtesy words in the native tongue of the country you are visiting. In Iceland, this can be tough. One look through a guide book at just the names of Icelandic towns and places is pretty intimidating, but don’t let that discourage you. We found Icelandic to be incredibly easy to pick up, and so will you, if you are just willing to give it a try. Still doubtful? Watch this video and you’ll see what we mean:

For the most part, we found all Icelanders to be extremely friendly, laid-back and good-natured, just like the girl we spoke to in the video. Unfortunately, the same can not be said of all of Iceland’s residents, especially the Arctic terns you will find everywhere around the country.  These beautiful birds use Iceland as their summer breeding grounds, and, as soon as their chicks fledge, they have to begin their 22,000 mile migration back to the Antarctic, making their ill-temper somewhat understandable. It’s too bad Matt didn’t know any courtesy words in their language to help him out of this uncomfortable situation:

The CuisineCentered primarily around fish, we found traditional Icelandic cuisine to be fairly basic. Matt’s favorite meal was the fish fry from the daily catch that he had right in the harbor of Húsavík. Beyond that, there wasn’t too much for these vegetarians to write home about. We were pleased to discover that Icelanders have a fondness for hearty soups, fresh waffles and decadent desserts. You can also find a small selection of international cuisine in larger towns like Reykjavík and Akureyri. 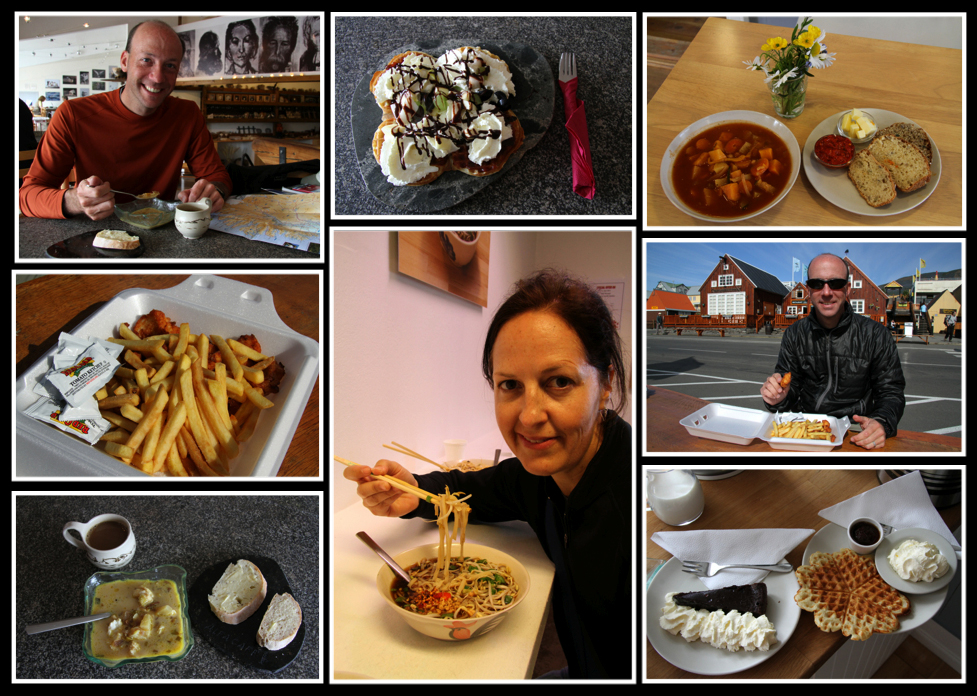 For the most part, we self-catered, so our expertise in this area is limited to making eating in Iceland as affordable as possible. Whenever we passed through a larger town, we stopped at the discount Bónus supermarkets for supplies and found most items to be reasonably priced as long as they weren’t exotic fruits (by which we mean grapes and apples) shipped in from too far afield. Our go-to supermarket meals were basic but included pastas, Indian curries over rice and noodle soups.

Iceland does, however, have some unusual delicacies that you should definitely try if you ever get the chance. When we were traveling on the Snæfelsness peninsula, we visited the Shark Museum where Matt sampled hákarl or putrid shark meat. Sounds delicious, right? Matt took one for the team and volunteered to be our official taster. Watch here to see how it is made and what he thought of it.

Camping
We cut our costs way down by avoiding Iceland’s expensive hotels altogether. We were in Iceland just shy of 6 weeks and spent every single one of the 40 nights we were away camping! We know that sounds crazy, but Iceland has a thriving camping culture, making it the most affordable and convenient way to see the country.

Camping fees are nominal (about $20/night), and sometimes the camping is even free like the campsite pictured above, which was just a few kilometers down the road from the Látrabjarg Bird Cliffs. Because Iceland is virtually treeless, most sites don’t come with the luxury of wooden picnic tables, but you will always find an ablution block with flush toilets and sinks for dish washing.

Unlike camping in the US, Icelandic camping is not necessarily a nature experience. Where we are accustomed to designated wooded sites in state parks, for example, campsites in Iceland are often simply large grassy fields where you can pitch a tent wherever you like. Many campsites come with gorgeous views like the this one below that we had all to ourselves on Flatey Island.

With hostels and farm stays starting at about $100/night for two people, we couldn’t pass up on this easy opportunity for substantial savings. According to the philosophy “a penny saved is a penny earned,” we felt like someone was paying us $80 a night to camp! Pictured below is one of our very favorite campsites of the whole trip. We spent the night at the base of the trail up to Dynjandi Falls in the Westfjords, allowing us to photograph its many waterfalls to our heart’s content. Best of all, there were only a few other campers, and the camping was free. Nodding off to the soothing sounds of a waterfall makes for a terrific night’s sleep!

Icelanders love to camp, and there is a campground conveniently located in every town. We had great conversations with locals and foreign visitors while making meals in the cooking shelters. We never needed reservations, so we could go wherever the mood took us and arrive whenever we desired. As nature photographers enjoying days filled with as much as 22 hours of sunlight, we often found ourselves out shooting well after midnight. Camping allowed us to come and go at whatever time of day we pleased. An added bonus is that we could almost always pay for camping by credit card (even in the middle of nowhere), and the campground hosts were trusting and perfectly happy to accept payment in the morning if we arrived at camp late at night.

Some people might find pitching a tent night after night a nuisance, but, believe you me, after 40 nights of it, we had our system down. Watch this quick time-lapse video, and you’ll understand!

Iceland has an excellent network of private buses that independent travelers can use to get around the country, and we gave that option some consideration before deciding that we would be better off renting our own car. With six weeks at our disposal, we wanted to take our time and investigate all the little nooks and crannies of the country. Additionally, many of the photographic highlights would be difficult or impossible to get to by bus. We really enjoyed the flexibility that having our own car afforded us, and, because we were camping and carrying so much expensive photographic gear, we also appreciated the peace of mind of being able to lock up our stuff.

Our car rental was by far our biggest expense. We did some online searches and found a local car rental agency called SADCars with the best rates. At approximately $100/day for their most economical option, that’s not saying much, but we bit the bullet and paid in full in advance to receive a 15% discount.

We are not quite sure what the acronym SAD stands for, but our little rental car was about the saddest thing around. This particular agency keeps costs down by buying retired rental cars from international companies. Our tiny car had dents and scratches, a few missing hubcaps, and over a hundred thousand miles on it. A few days into our trip, we had to stop to get the muffler welded back on before it rattled off, which SADCars paid for without question. We were relieved to find that this little 2WD had no problem handling Iceland’s tough driving conditions. 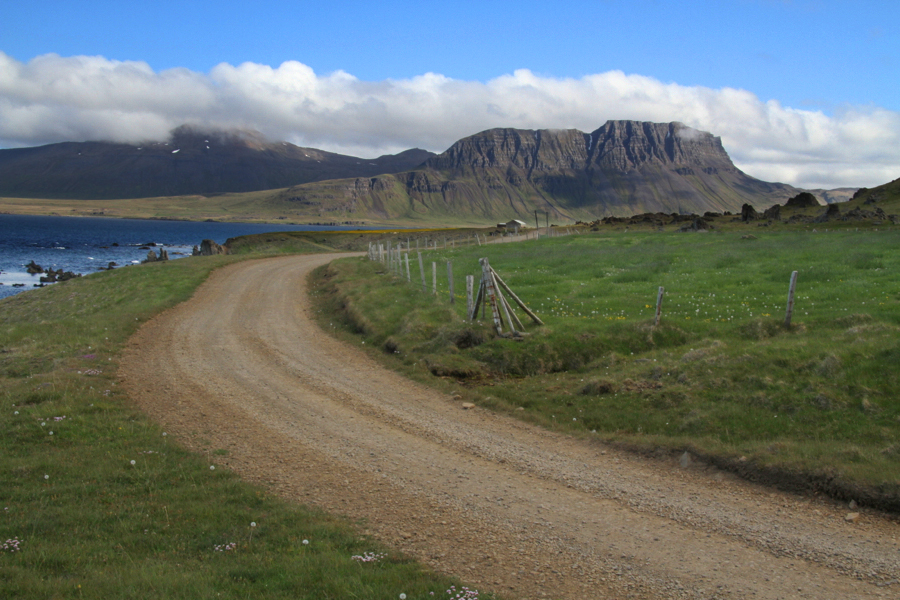 Most of Iceland’s main roads are paved, but even on the Ring Road (Rte. 1) the pavement occasionally runs out, and we found ourselves suddenly driving on sections of gravel. The smaller roads in the Westfjörds, North and Eastfjörds where we ended up spending most of our time almost all looked like the photo above. We couldn’t afford a 4WD car, so we had to avoid the fjall or mountain roads (F roads) where taking a 2WD vehicle is strictly prohibited. This didn’t limit us too much, and our little car managed to get us almost everywhere we wanted to be.  This video will give you an even better idea of what driving in Iceland is like.

We really didn’t run into any serious problems while racking up over 4000+ kilometers of mileage, but we did have an ongoing battle with the dust that constantly accumulated on our car. Lucky for us, we discovered early on that nearly all of Iceland’s gas stations provide a very convenient, free car washing service. This became one of Matt’s favorite pastimes, and it also helped soften the blow of paying over $6/gallon for gas!

Any Questions?
So, we hope these practical tips might encourage you to do your own self-driving tour of Iceland. If you have any tips of your own or questions about anything else, please let us know in the comments section. We are more than happy to answer them!

16 thoughts on “A Practical Guide to Independent Travel in Iceland”