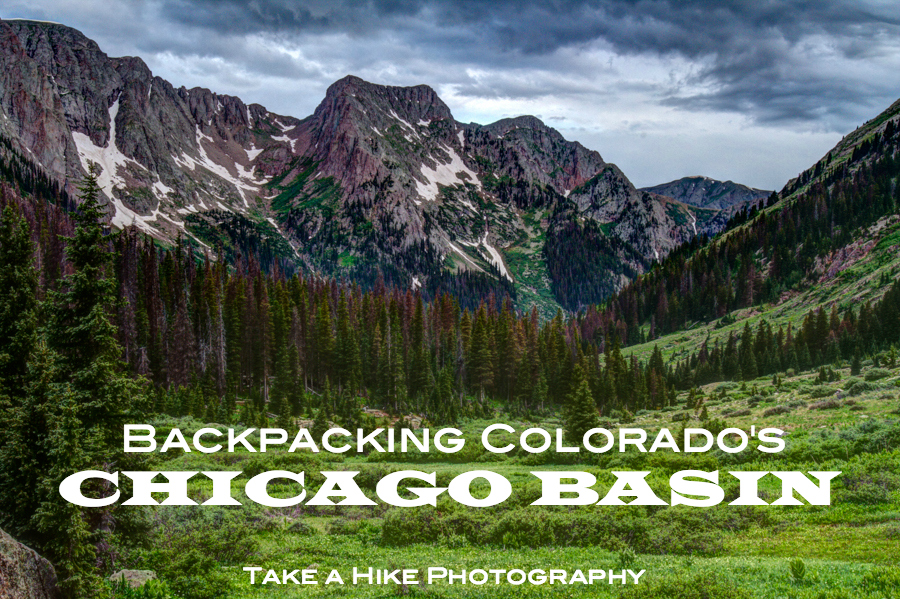 We have been at this hiking thing for quite a while now. We count ourselves lucky to have done some truly incredible treks over the years, but the summer of 2016 was definitely shaping up to be our biggest and baddest backpacking adventure yet. After years of thinking that the John Muir Trail was too long (211 miles!), too high (14,508 feet to the top of Mt. Whitney!) and too tough (7-day food carries, treacherous river crossings and a constant supply of 5-figure high passes!), we decided to throw caution to the wind and just go for it. Life’s short, right?

We got a permit to start hiking the JMT northbound beginning on the 4th of July. We planned our route, mailed off our resupplies, packed up our bags and finally set off on the long drive out to California at the end of June. So, how did we end up in Colorado?

The drive from Chicago to Yosemite National Park in California is over 2200 miles, and the last thing we wanted to do was to be cooped up in our car for 4 days straight before hitting the trail. Looking at the route west to California, we realized that we would be driving right through Colorado, which would be the perfect place to break up the drive and get one last training backpack in before tackling the JMT. Even better, we could base ourselves out of Durango, a town we have always wanted to visit, and spend some time with our dear friends and fellow outdoor enthusiasts, Rob and Amy, who just so happen to live there. Sure, it would be a little it out of our way, but it would be totally worth it. 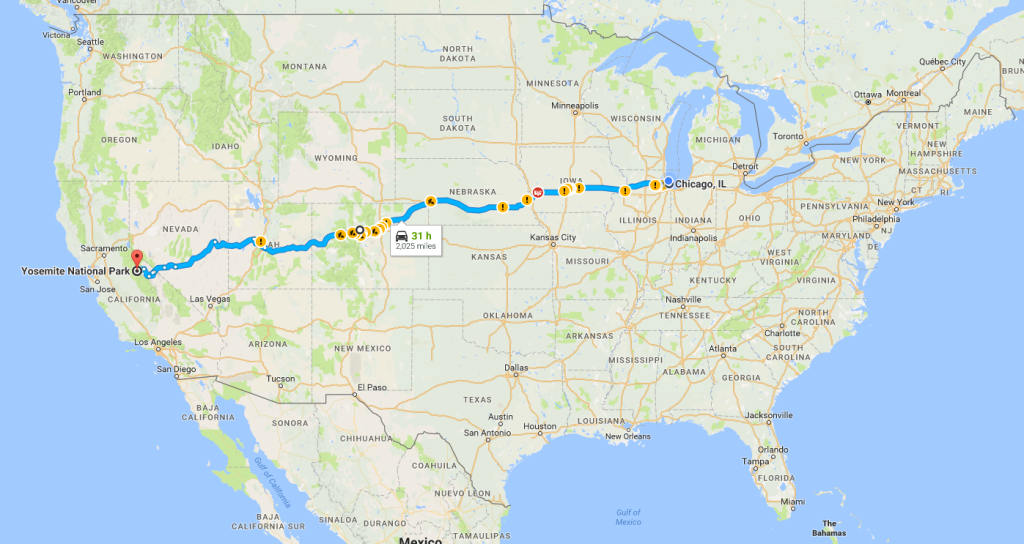 We met Rob and Amy quite by chance in Tanzania back in 2013. We happened to be staying at the same hotel in Moshi. We had just finished climbing Mt. Kilimanjaro with our friend Leah. They were about to start their trek, and we were eager to share the story of our successful adventure with anybody who would listen. They were all ears, and we all hit it off immediately. The next summer, Rob and Amy proposed hiking in the Himalayas together, and so the four of us joined up in Ladakh, India, in the summer of 2014 to trek the Stok Kangri Circuit together. 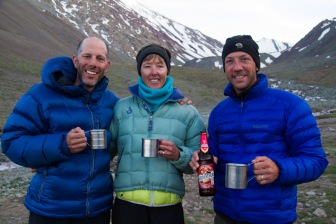 After being with Rob and Amy in so many exotic locations, it was great to finally spend some quality time with them in their hometown of Durango. We hung out in their beautiful home, caught up on each other’s lives, talked travel incessantly (our favorite subject!) and even did a few of their favorite short hikes together to help get us acclimated to Colorado’s higher elevations before we headed off on our own to backpack for a few days in a popular spot called the Chicago Basin. These day hikes were a great preview of the dramatic vistas and gorgeous wildflowers we would see in the days ahead. 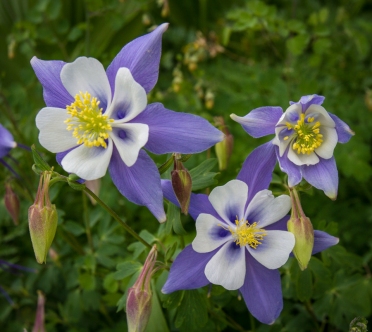 When we were researching a short backpacking trip to do in Colorado, the Chicago Basin immediately grabbed our attention. Not only is the scenery supposed to be spectacular with a trio of fourteeners in the area, but the Basin is also home to a resident herd of mountain goats that you can pretty much guarantee seeing while you are there. But the real draw of this trail for us was the unique way hikers access the trailhead.

The Chicago Basin is located in the Weminuche Wilderness between Durango and Silverton, and it is not accessible by car. In order to get there, you can hike for several days in from the closest car park or you can hop aboard the Durango & Silverton Narrow Gauge Railroad train and get dropped off in the middle of the wilderness to begin your hike. Sounds pretty cool, huh? We thought so, too, and that pretty much decided it.

So, it’s all aboard for the next Take a Hike Photography adventure. Chicago Basin, here we come! Let’s get started with Day 1 right now: 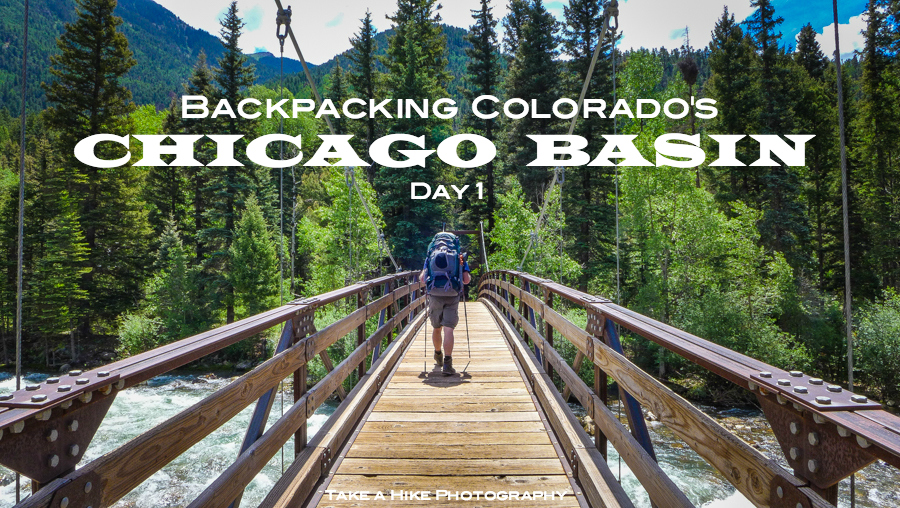 We wake up bright and early this morning to finish packing up our backpacks and bid a fond farewell to Rob and Amy. After leaving their house, we drive downtown to the train station, park the car in the station’s long-term parking lot, pick up our tickets and head to the train platform. After putting our backpacks in a boxcar, we climb on board and find our seats inside. Within a few minutes, the narrow gauge train blows its whistle, and we are off, chugging our way through the Durango valley. 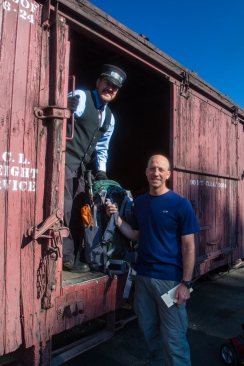 It takes a while for us to clear the greater Durango area, but the signs of civilization slowly begin to fade away, and soon we are climbing steadily up into the Weminuche Wilderness. The old narrow-gauge train we are on was built in the 1920s and runs on coal and steam. It moves at a snail’s pace with top speeds of only 18 mph. As we head deeper into the forest the train follows the Animas River rushing below and beside us. At one point the train stops to do a “blow out” where the conductor literally lets off all of the built up steam in a sudden discharge. The massive force of the steam is impressive! 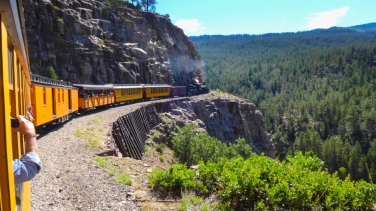 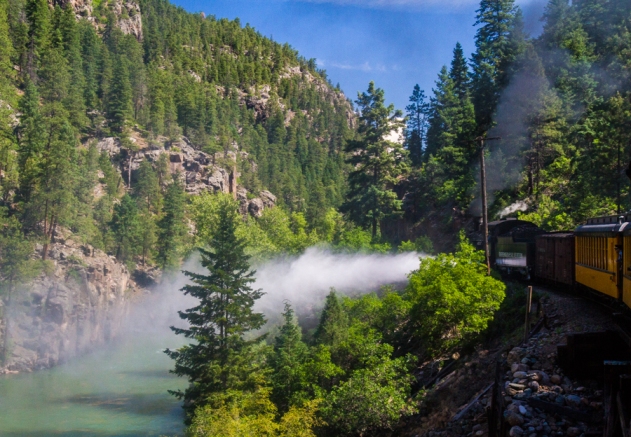 The 2.5 hours on the train seem to fly by, partly due to the amazing canyon scenery that distracts us, but also because of the anticipation and excitement of beginning another adventure into the unknown. Before long, the conductors announce the “stop” at Needleton (apparently just a needle in the haystack of the Weminuche) and herd all of the backpackers up to a single car toward the front of the train. The engine finally comes to a halt at a footbridge, and the train stops in the middle of nowhere. All the backpackers onboard jump off and hurry to the box car at the front of the train to collect our backpacks. 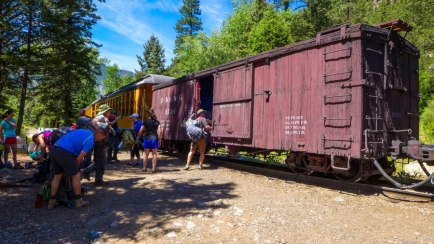 There are about a dozen backpackers in all, and each of the other groups takes off one by one as Matt and I get our bags configured, zip off our pant legs (it’s hot!) and take some photos. As usual, we are the last to leave—the Slowski’s strike again! 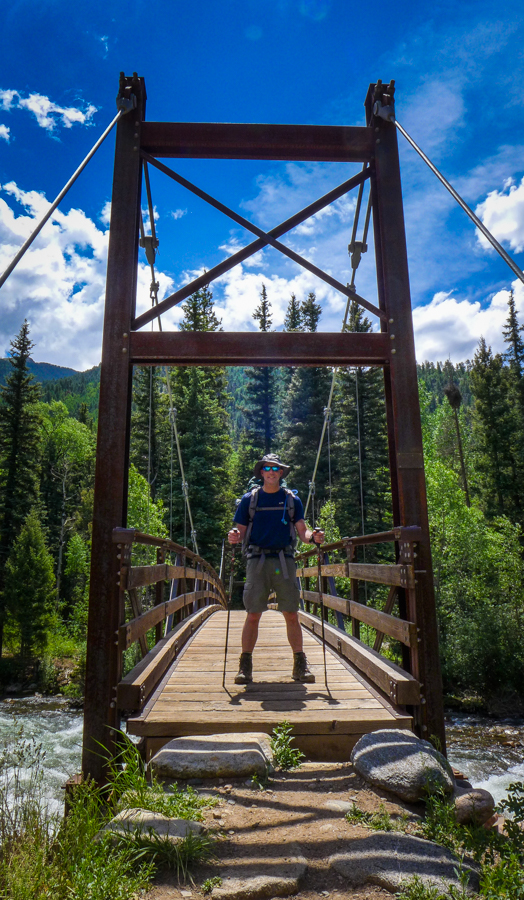 We finally set off on the trail, and, after just 15 minutes, we encounter a pair of hikers on their way out. Dan and Terry are from Texas, and they have spent the last 6 days backpacking in the area.

“Beware of the salt-eating porcupines,” Dan calls out as he makes his approach! 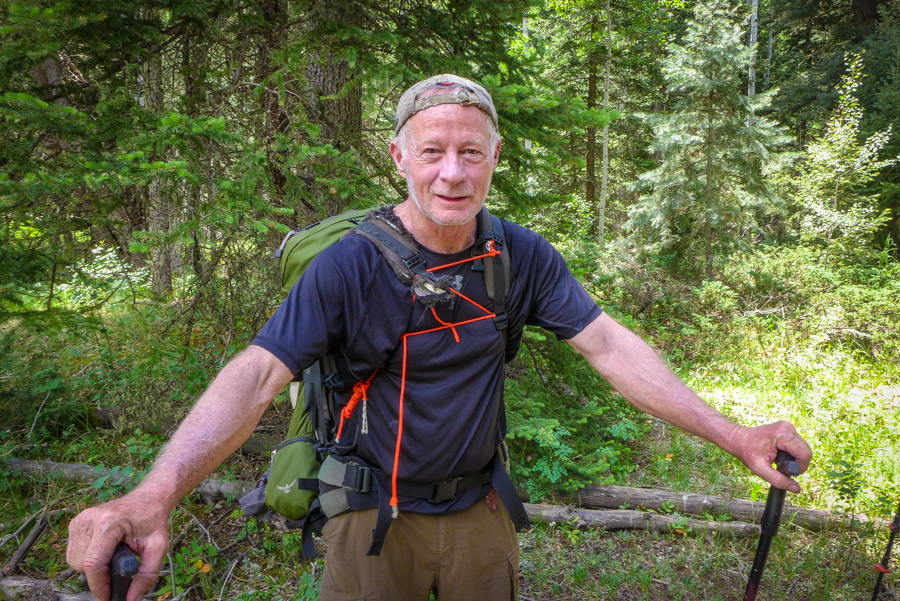 We must look confused. He gestures to his backpack by way of explanation. His shoulder strap has been completely gnawed through, and it boggles the mind to think what caused the damage. If he had told us that a hyena had mangled it, we would have believed him! Dan has managed to “MacGyver” his strap back together again through an ingenious makeshift weave of orange parachute cord that allows him to shoulder the bag. There’s no way it can be comfortable, but at least he can carry his gear out in a single load.

Apparently, Dan hung his pack in a tree hoping to avoid bears, which is a smart thing to do, for sure. But the poor man was unlucky enough to choose a tree occupied by this intrepid porcupine, who, in the dark of night, sniffed out his bag, said thank you very much, don’t mind if I do and made a late night meal out of his sweat-soaked straps. Now, that’s a wake up call. It reminds us both of our night camping above Blue Lake near Ouray, which is not too far from where we are presently, when a porcupine crawled under the fly of our tent several times during the night. I tell Matt that we are sleeping with our backpacks inside the tent. He’s totally on board.

We say our goodbyes and continue for another 20 minutes or so until we reach the official start of the Needle Creek Trail. Here we put our names down in the trail register and read all the warning signs for the area. It’s a healthy reminder of all the precautions one should take before heading off into the wilderness, so we don’t mind the refresher. 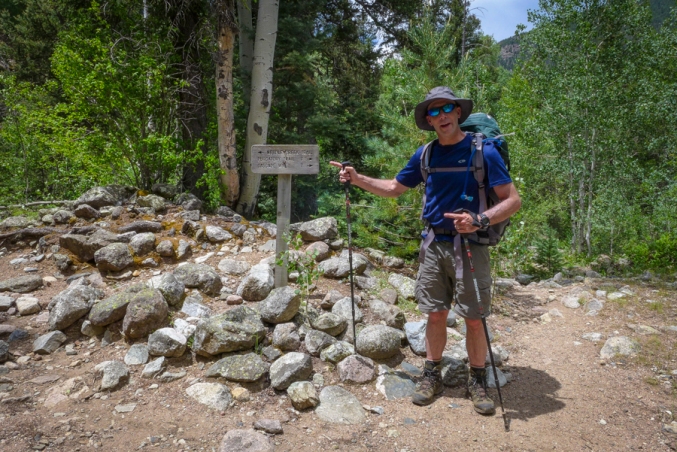 Now on our way, the trail takes a gentle uphill grade as we follow alongside noisy Needle Creek. The forest around us is enchanting. Everything is so green and lush—much more so than when we were here back in 2012 when the whole state was suffering a drought. And there are tons of beautiful wildflowers to enjoy along the trail. 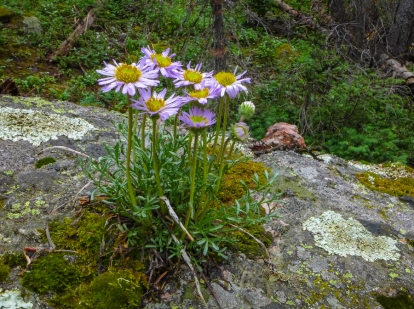 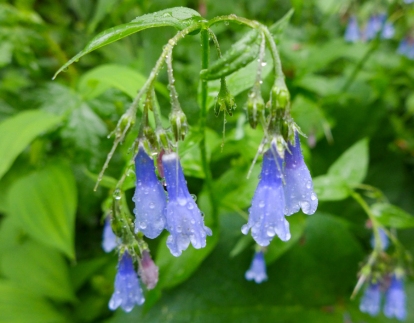 In almost no time, we notice that the sunshine has disappeared and the skies have turned ominously dark. We hear the distant rumble of thunder even over the noisy creek but opt to keep hiking on. Within an hour the skies open up on us, so we stop to pull out our rain jackets and pack covers. We press on, but eventually we see lightning. Within minutes, it begins to grovel (the Colorado high-altitude equivalent of hail). We take cover under a tall tree and break out lunch right in the middle of the trail to help pass the time. Once our bellies are full, the rain stops, and we hit the trail again, playing peek-a-boo with the pretty views of the creek cascading its way down to join the mighty Animas. 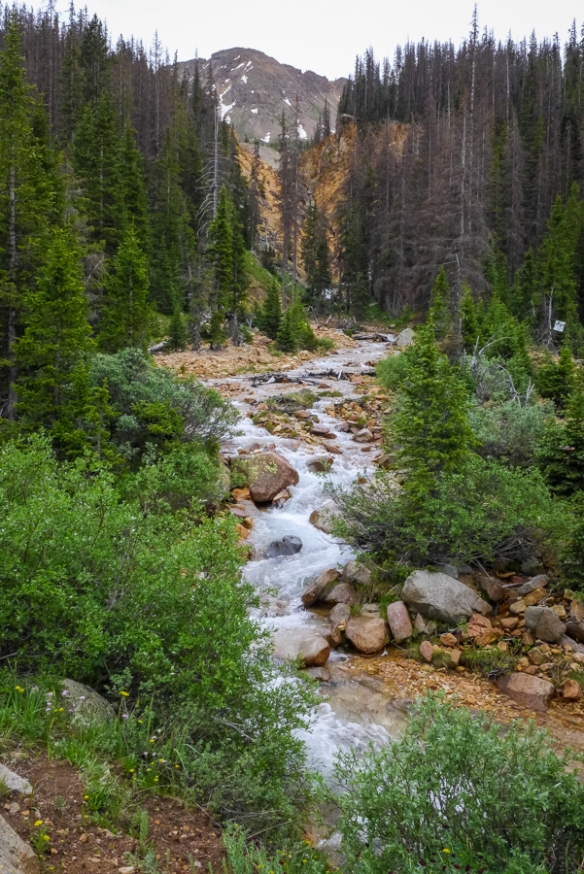 Finally, the forest thins out, and the views of the surrounding mountains open up. We wonder if we have arrived in the Chicago Basin. There is a small side trail to a viewpoint above a waterfall. We head over to check out the scene, which is impressive indeed. We take off our packs, strip out of our rain gear and pull out the cameras to go explore a bit.

Back on the trail, we begin to notice small footpaths leading to nearby campsites just out of sight of the trail, all of which appear to be taken. We know that we are most likely the last hikers to arrive in the Basin for the evening, and that familiar sense of panic that comes when camping in an area without designated, reservable spots starts creeping in. But we notice that the higher we get up into the Basin, the more beautiful the scenery gets, and we decide to press our luck and continue on.

Just before the trail junction to Columbine Pass, we find an amazing spot with a big rock slab for our front porch and a Pinch-yourself-I-must-be-dreaming view looking back down the Basin. How on earth did we get so lucky?!?! We set up our tent, fetch water and make a delicious Good-to-Go curry dinner. The scene before us is majestic, and we relish the grandeur of our location in silence for a few moments before it’s time to clean up and get ready for bed. 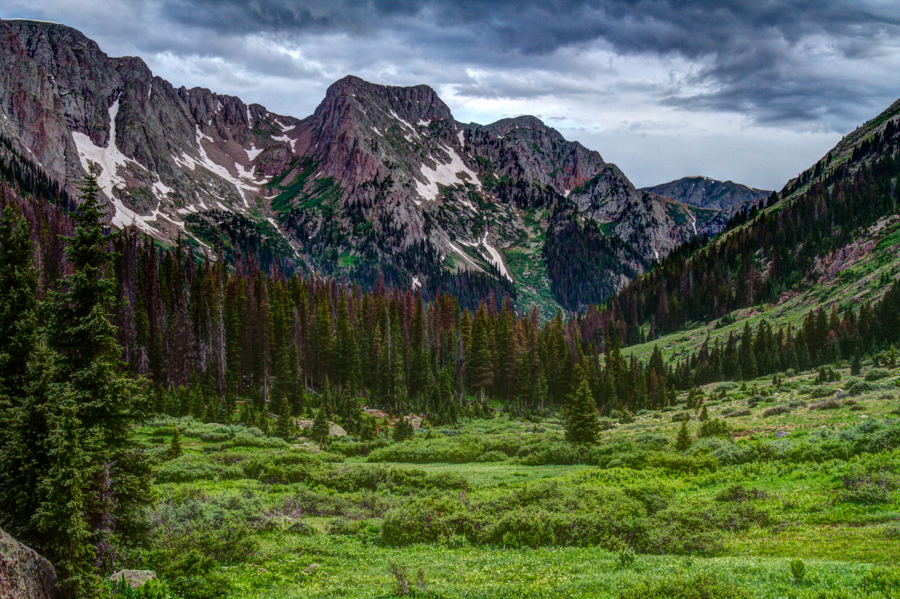 Remember that herd of goats we told you about? Well, they are nowhere in sight at the moment, which is probably a good thing for us. Apparently they are attracted to the salt of human urine, so they can be a little difficult to deal with if they happen to be around when you drop your pants to relieve yourself. We heed the advice given to us about not peeing alone and go together to find an appropriate “bathroom boulder” since we have also been told to pee on rocks. This helps to prevent the goats from constantly digging up the soil or vegetation in this very popular camping area. It’s a lot to think about when you just need to pee!

Bladders empty, we brush our teeth and head to bed, hoping for a solid night’s sleep. We are eager to explore more of the Chicago Basin in the morning.