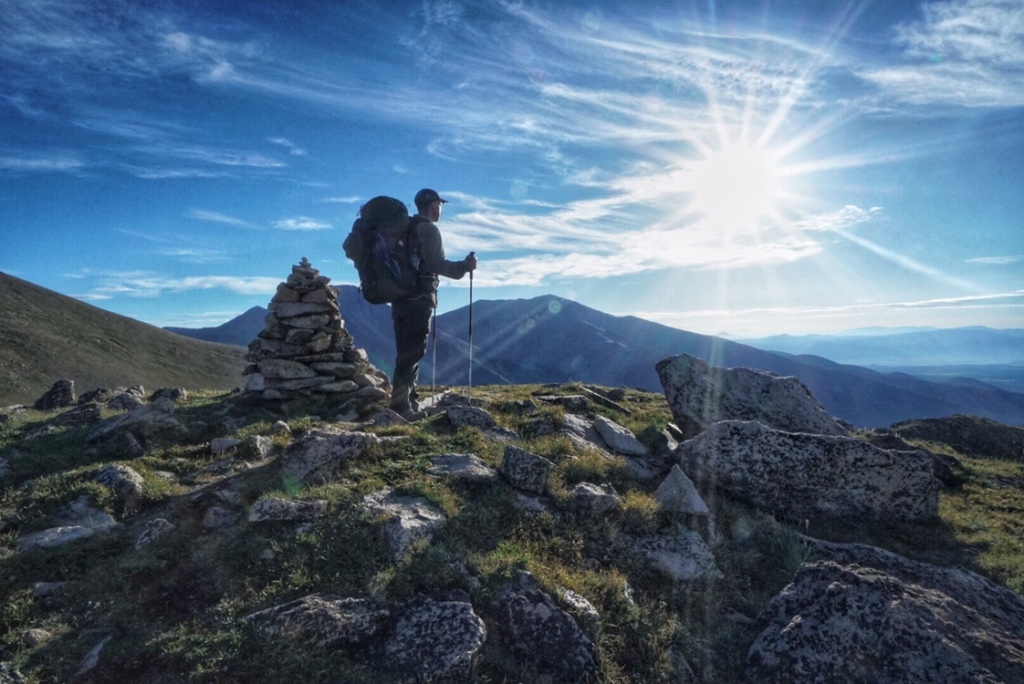 We set the alarm a little early this morning (4:30), so we can break camp and hit the trail early. We are eager to get to Salida for a couple of nights of R&R, but we still have 9 miles to cover as the data book told us that Hunt Lake was the last viable camping spot with water before reaching Monarch Pass.

We wake up in the dark. I get the coffee going, and, as we finish packing up, the sunrise starts to light up the clouds. After yesterday afternoon’s thunderstorm, it looks like it’s going to be a beautifully clear morning.

We set off climbing steadily up the hill above Hunt Lake, gaining better and better views of Mount Aetna and the surrounding peaks. The golden rays of the first minutes of sunlight this morning cast everything in a magical light. We stop frequently to capture the light. 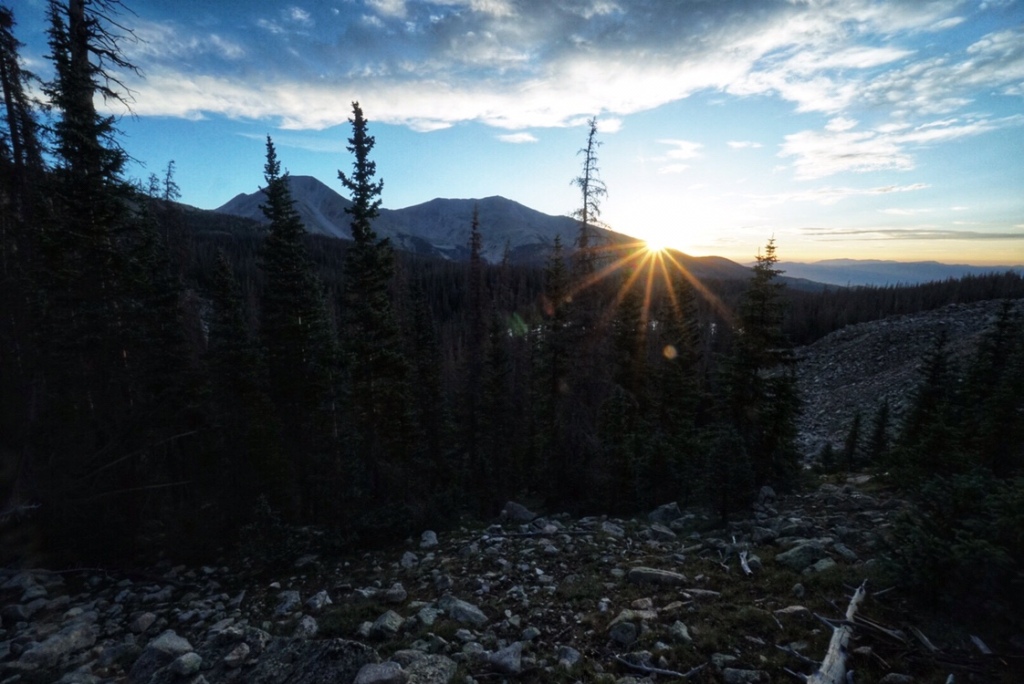 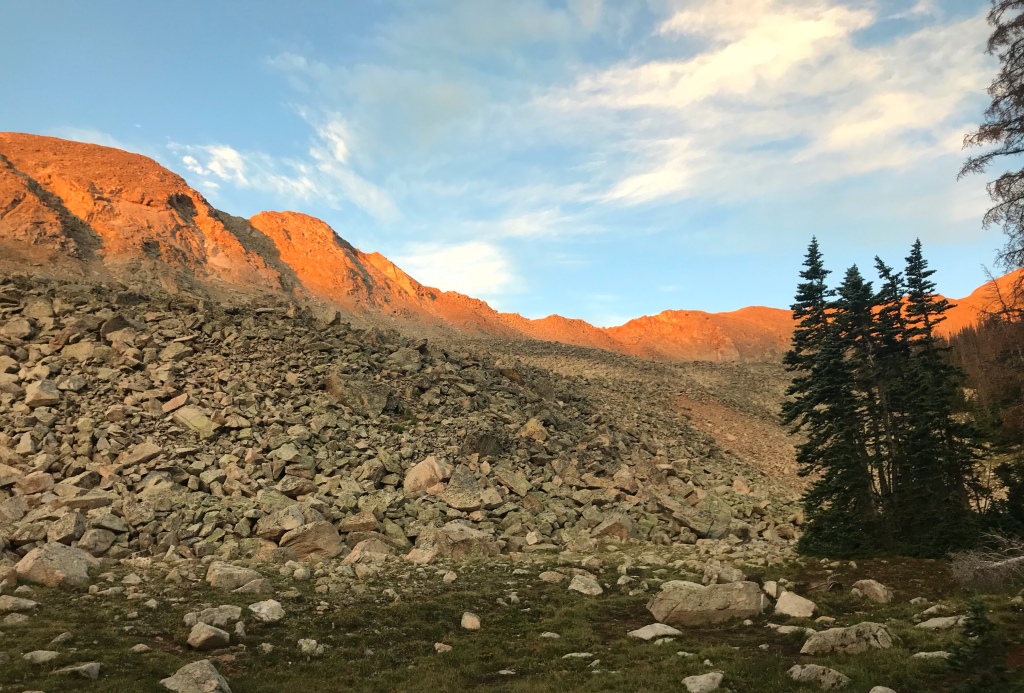 As we climb toward the ridge we come across two mountain tarns, one of which is glass calm and has an amazing reflection. 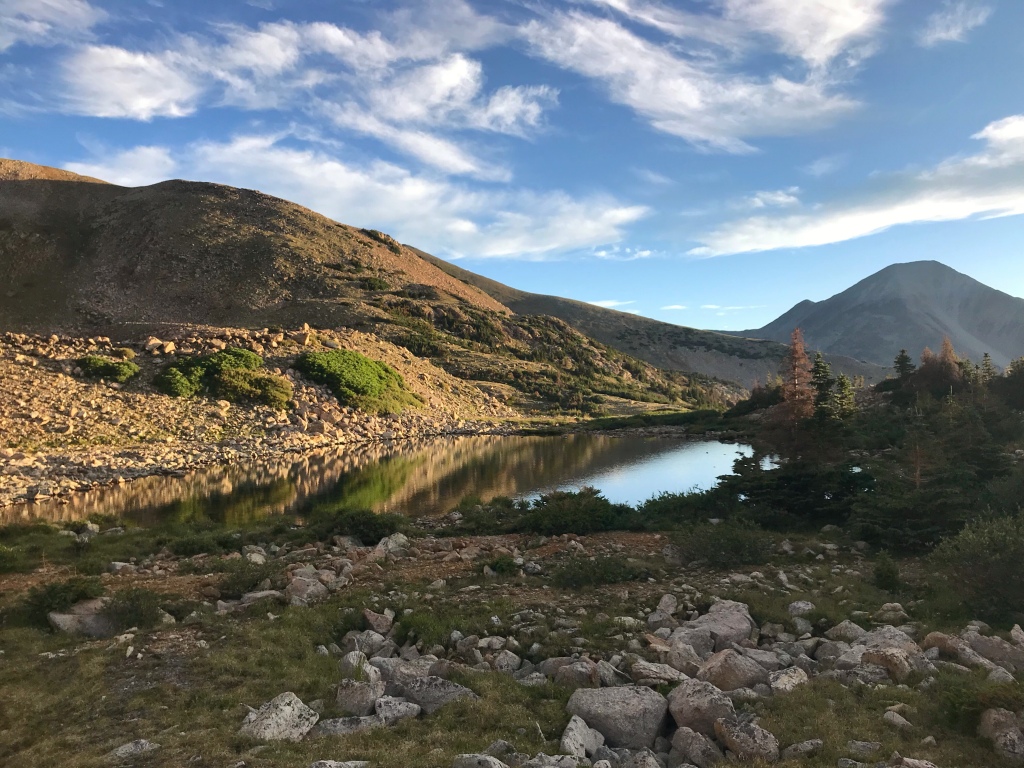 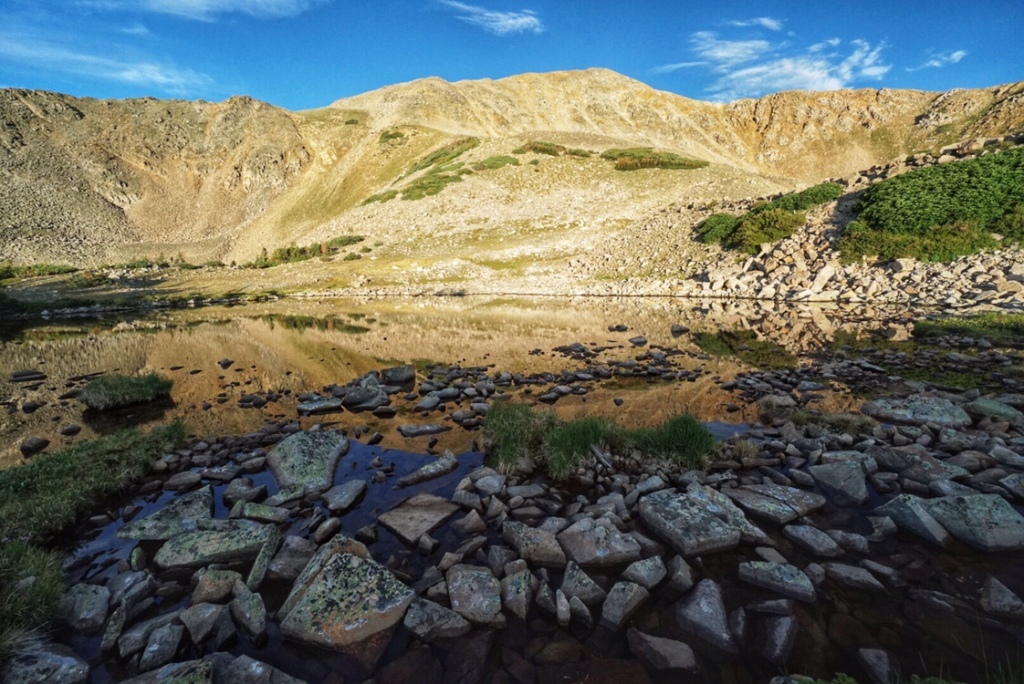 Our mood is light and optimistic as we reach the high point on the ridge, knowing we have a fairly easy walk down to Monarch Pass. Still, we have miles to cover and a goal of eating lunch in Salida and avoiding another PB&J tortilla. We add a few rocks to the cairn marking the pass for good luck and move on. 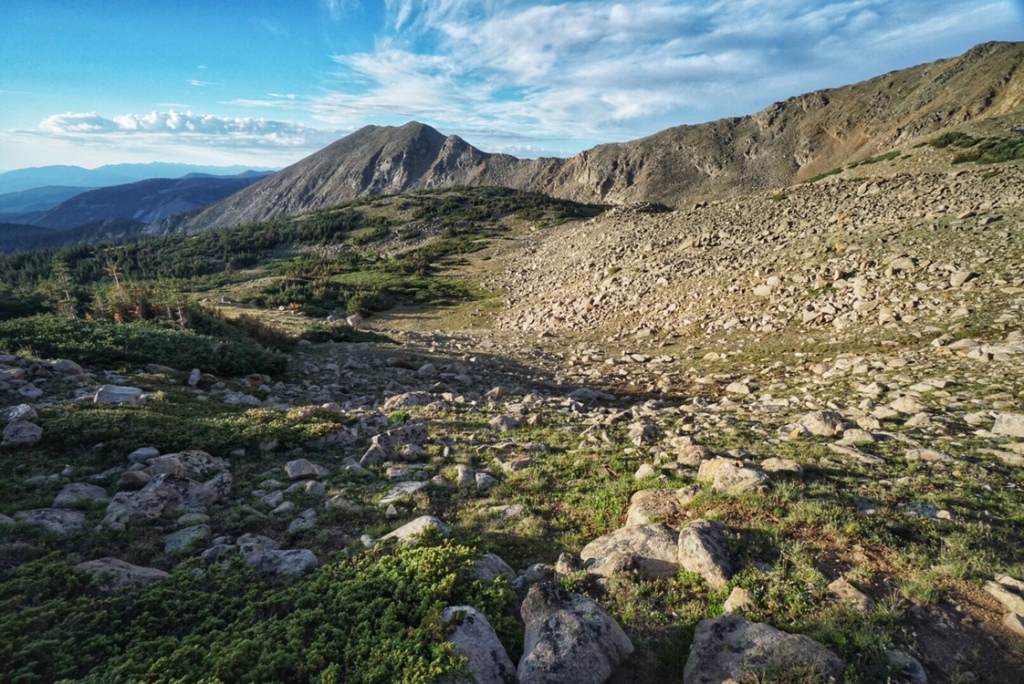 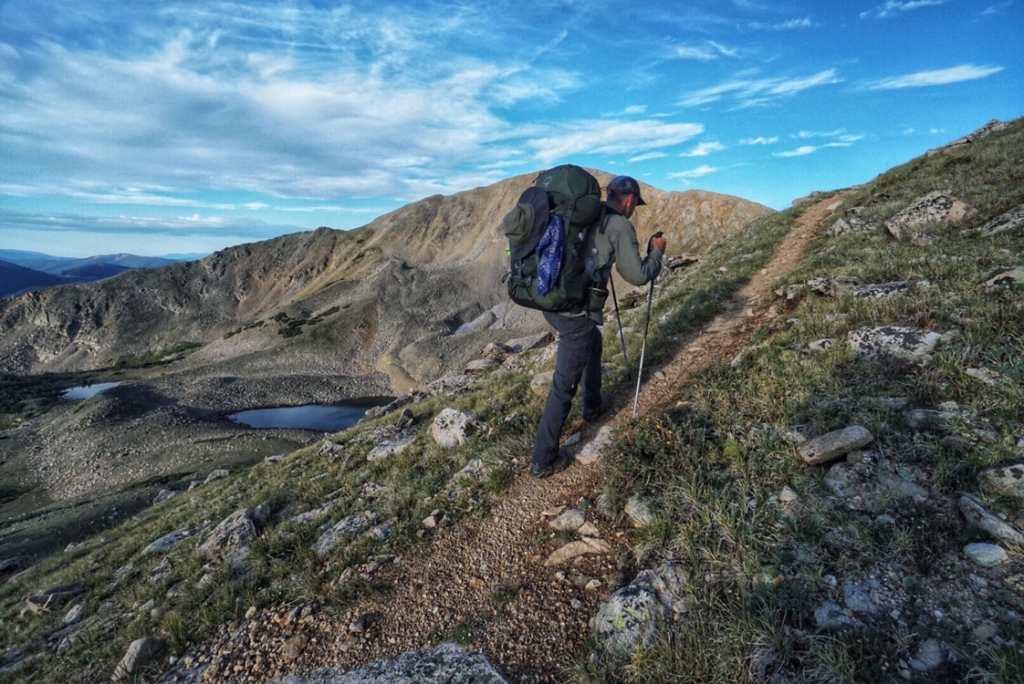 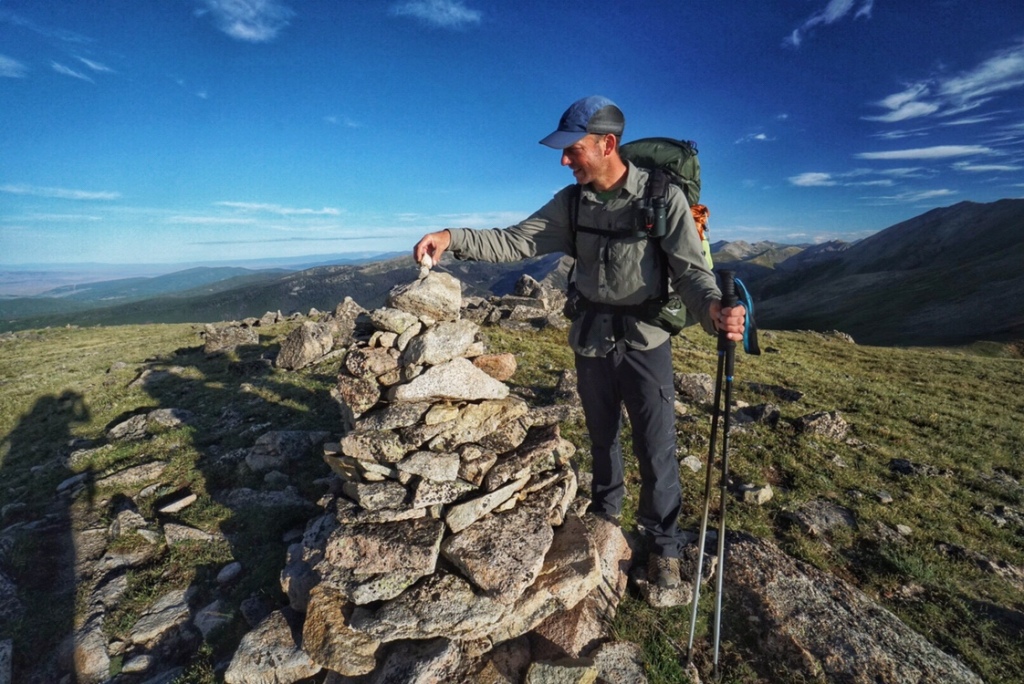 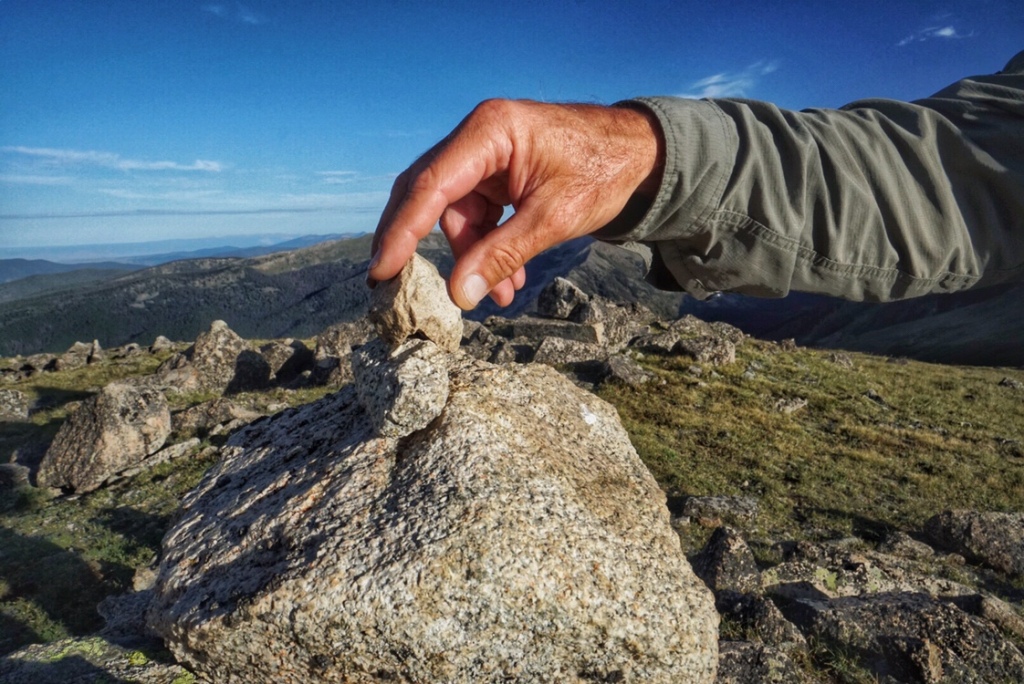 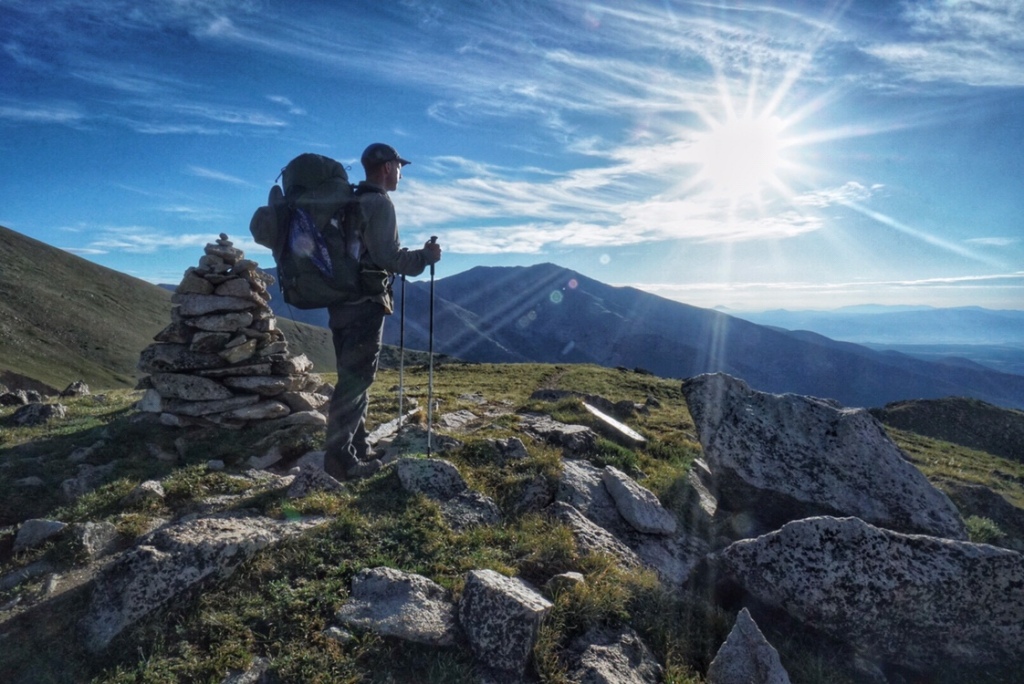 We hike several more miles before running into our first hikers of the day. We are surprised not to encounter more day hikers and mountain bikers since it is a Sunday. The couple we meet are from Pennsylvania and are hiking the Collegiate Loop. They, too, validate what we have heard about the older East route and are excited to finally climb out of the trees and see the mountains above tree line. We see lots of birds flying around and eating insects, mostly mountain bluebirds and Clark’s nutcrackers, both of which are flashy flyers. 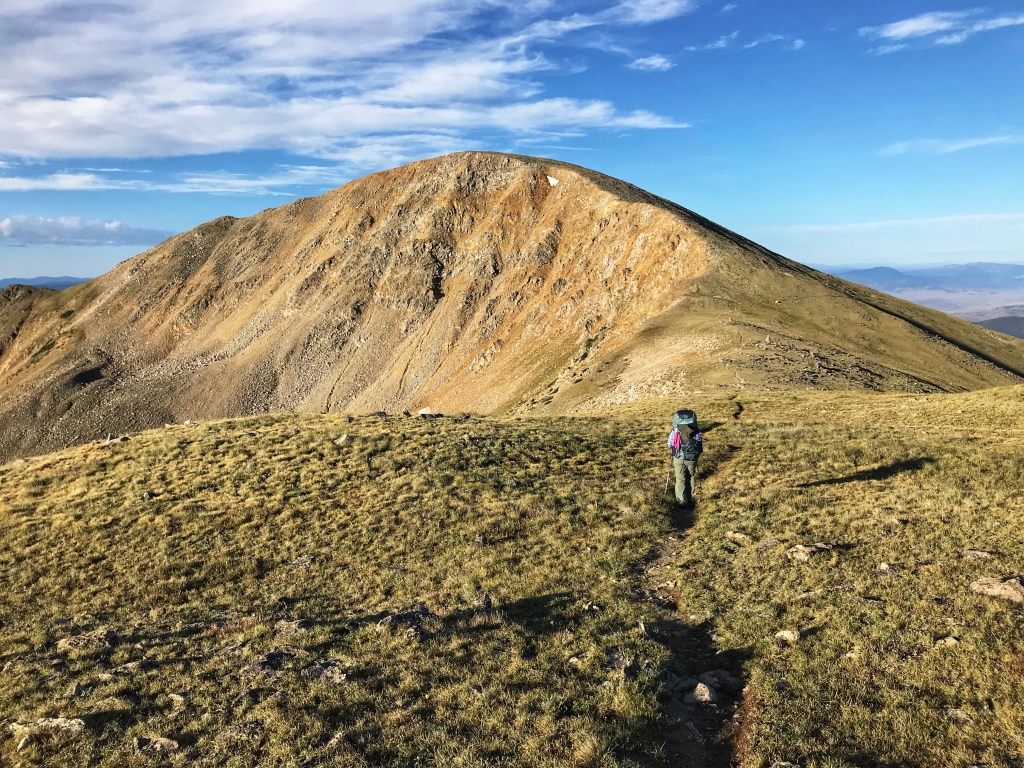 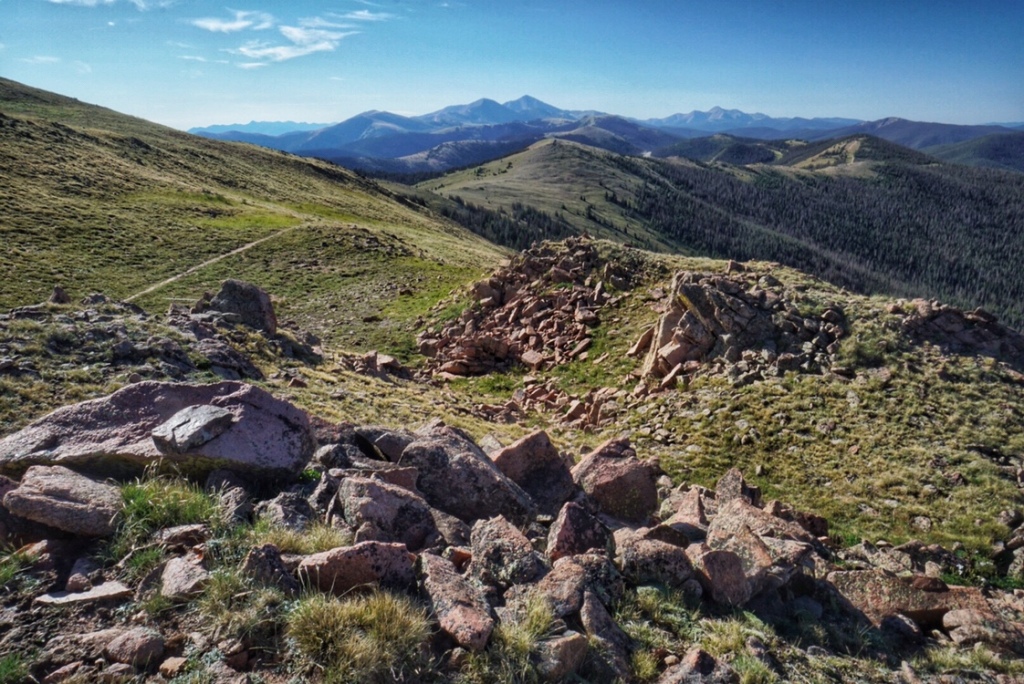 Soon we reach the Monarch Ski Resort and walk past avalanche fences, chairlifts and signs for the various ski runs. It’s hard to imagine this place buried in snow on such a warm day! 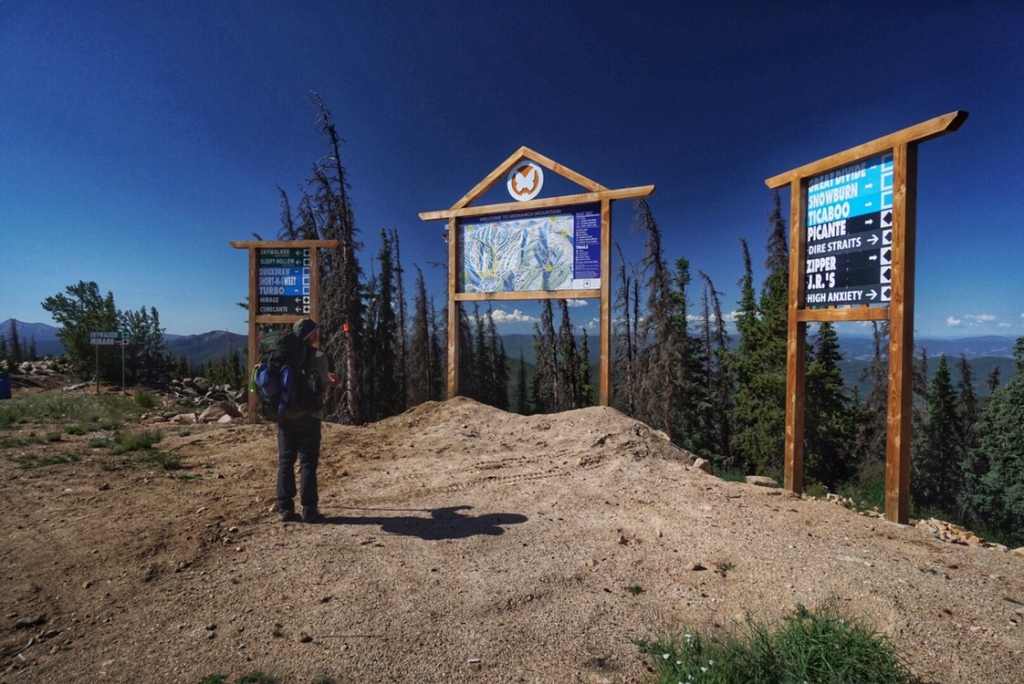 The trail joins up with a gravel road for a while as we get our first glimpse of Highway 50 and Monarch Pass. The excitement grows as we contour around our last hill and down to where we cross the highway. It always feels weird to touch pavement again after you’ve been walking trails for so long.

We cross the 4 line highway and, as we approach the Monarch Crest Travel Store, we see Steve (Mr. Colorado) and Emma (Skeeter) waiting outside. They’ve just arrived and are waiting for family to pick them up and take them down to Gunnison for a zero day. We chat about the thunderstorm last night and the challenge of hiking the Collegiate West before they head off. We hope to see them on Tuesday when we all get back on trail.

It’s time to hitch a ride down to Salida which is 22 miles away, so we put our packs on and our big, friendly smiles and edge out to the exit in the direction of Salida. We stick our thumbs out for less than 5 minutes when a big Ford truck pulling a big trailer and a smaller one behind that slows down, rolls down the window and the driver asks where we are headed. He tells us that he had a cousin who hiked the CDT last year and that he picked him up and helped him out, so he’s familiar with hikers like us in need of a lift. Alison’s excited because she gets to see the inside of the trailer, a future retirement dream of ours.

We jump in the truck and start chatting with the couple who have a 4-year old son with them. They met in Montana but now live an hour past Salida. We talk about what it’s like to hike the CT and the differences between living in Montana and Colorado. Before long, we are pulling into Salida. They drop us in the downtown area, and we wave a grateful goodbye. 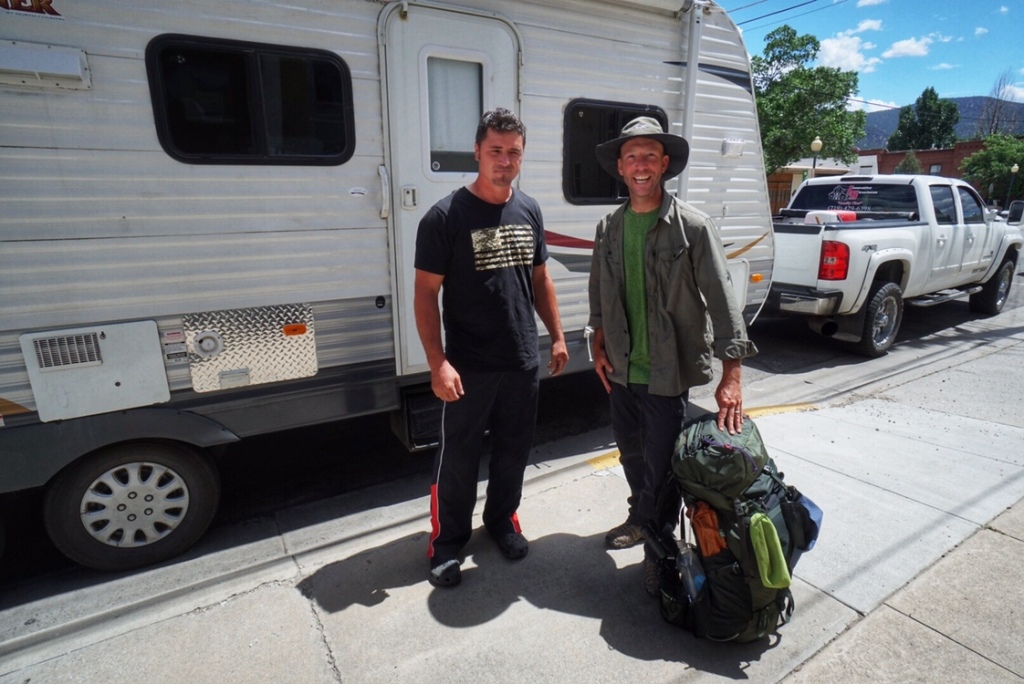 We shoulder our packs and walk a few blocks to the Simple Hostel & Lodge which we will call home for the next two nights. Unfortunately, no one is home, and check in is not for a few hours. So we head off and find a quick lunch at a nearby coffee house.

We had heard that there was a beer festival in town this weekend. We head down to the riverfront and find a small music and arts festival. We locate the beer tent for Soulcraft Brewery, grab a cold one and park it in the shade as a local band plays an inspired set of mostly 70’s cover tunes. I cleary built this into a much bigger event than it turned out to be, but it turns out to be a relaxing way to pass the heat of the afternoon.

Just behind the stage is the Arkansas River. We amuse ourselves by watching as a steady stream of people float down the swift-flowing river on inner tubes and then march back upriver along a path only to plop back in and do it again. Occasionally we see a tube without a rider or a hat floating without an owner.

It looks like fun, so we decide to explore the idea. We meet two young women who explain where to rent a tube. They kindly offer to loan us theirs while they go grab a beer, so we accept. Just as we do, the clouds, which have been characteristically growing darker in the late afternoon, begin to take on an ominous appearance. The wind picks up and flash of lightning puts an end to our river dreams. It’s too dangerous to head out on the water in threatening conditions like this. Maybe we’ll get a chance to try it tomorrow. So we head back and check in to the hostel.

It turns out that a big group that was supposed to stay here tonight decided at the last minute to leave, so we have the entire place to ourselves. As hostels go, this is a nice one. It’s such a relief to have space to relax, shower, do laundry and cook, if need be. I forget how much I enjoy having access to a kitchen. 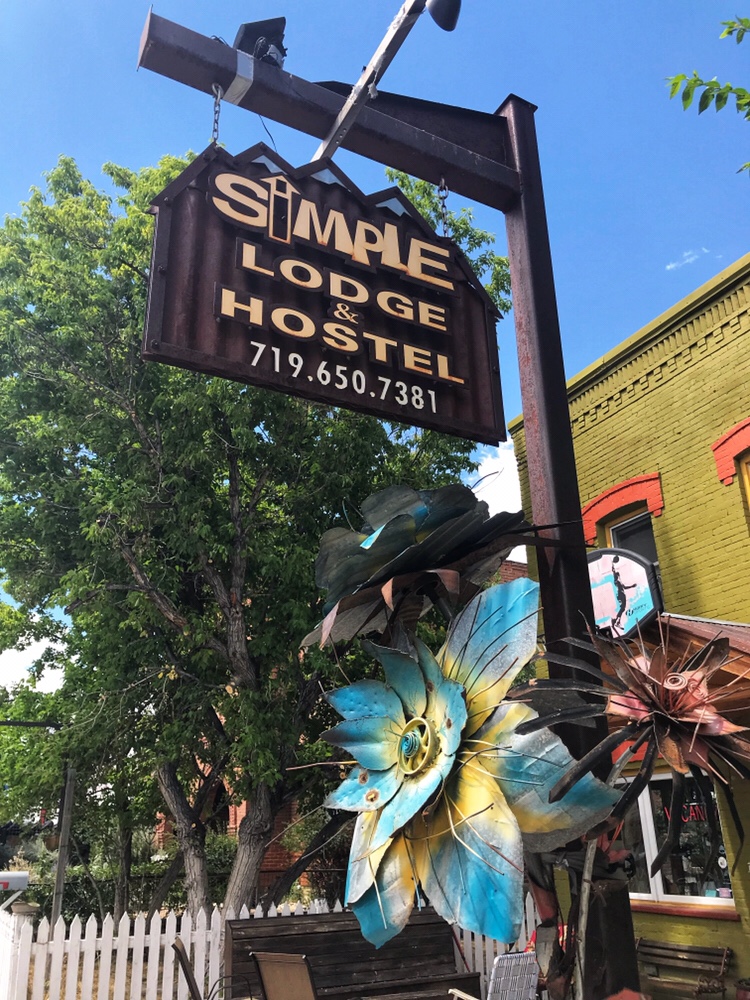 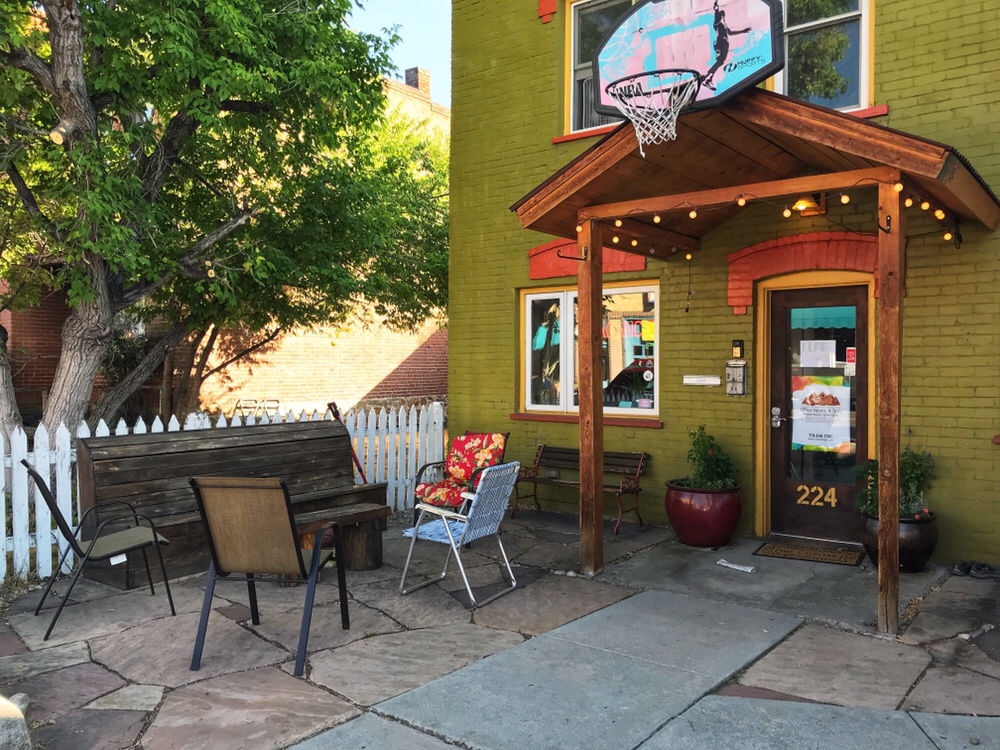 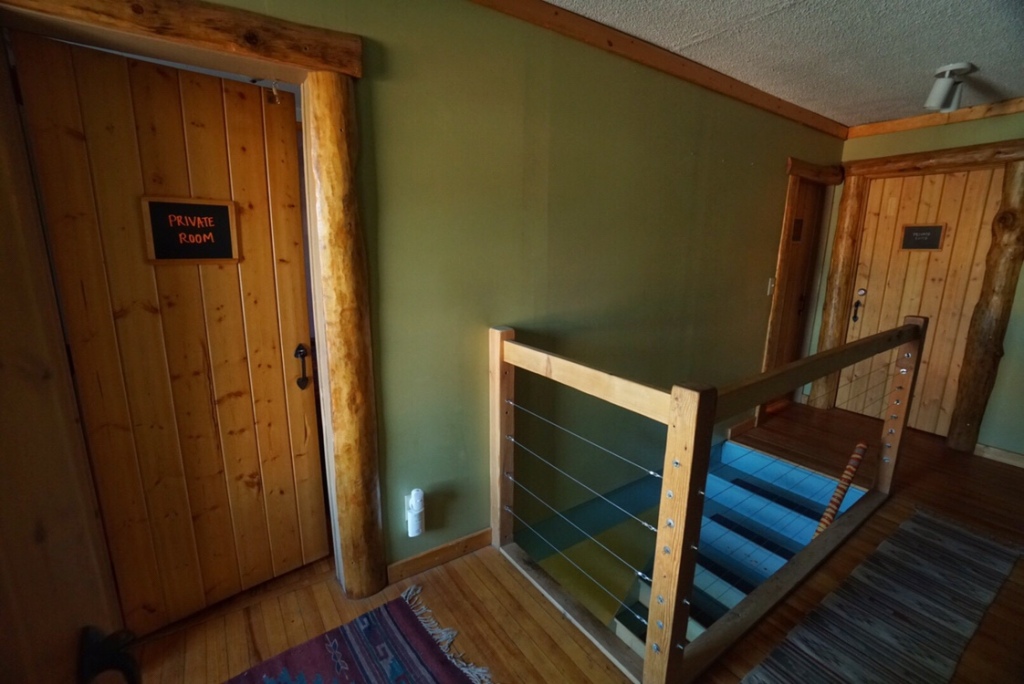 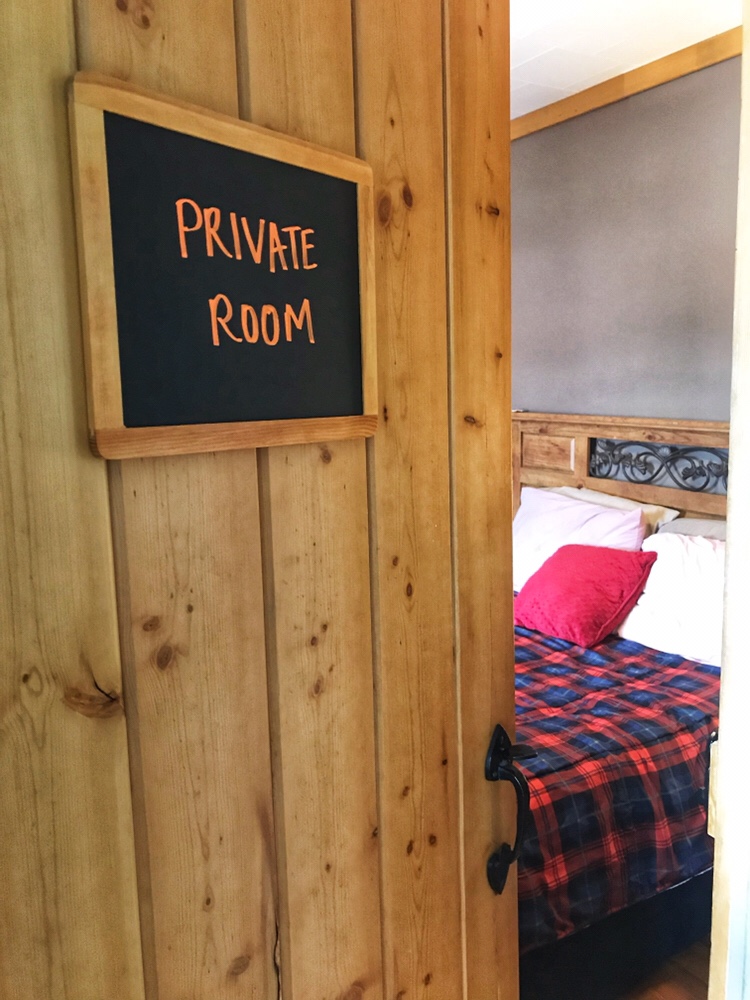 We have a small private room where we unload our bags. Tomorrow we will take care of our resupply when the post office opens but right now the priority is getting in the shower. We ask Ali, who is on staff here, if there is any shampoo and conditioner that we can use. All she can find for us is a bottle of Old Spice Swagger Shampoo for men that Alison isn’t too thrilled about, but beggars can’t be choosers, right?

After cleaning up, we chat for a while with Ali, and she offers some tips on where to get food over the next two days. We get in touch with Paul and Ellen (the Orchestra), who are back on the trail and in town after Paul’s “rescue” a few days ago. We are eager to hear the full story of his adventure, and so we meet them at a Mexican restaurant for dinner.

Over margaritas, chips and salsa, we get the full version: it turns out Paul really did have a kidney stone. The 6-man crew found him on the trail, administered pain meds and an IV for dehydration and stretchered him to an open field where a helicopter whisked him away to Gunnison.

He managed to pass the stone in a few hours, checked out of the hospital and a day and half later got back on the trail where they met up with Juli and Eden. We are relieved to hear he is well and glad to hear the Orchestra is back on the CT. We say our farewells and walk leisurely back to the downtown area.

We decide to head to Bensen’s Tavern to check out the local beer. We settle on a couple of Elevation IPAs which are brewed in nearby Poncha Springs. It has finally cooled down, and it’s pleasant to sit outside in the outdoor beer garden. Back at the hostel, two other folks have checked in, but it remains a quiet place to catch a night’s rest off trail. We bid everyone good night and fall asleep quickly in a real bed, happy to have another day tomorrow without our packs!