Safari on a “Budget”
As teachers with way more time than money, organizing a budget camping safari was the only way we could afford to see Tanzania’s national parks for the length of time we wanted. In total, we had booked a two week safari with five glorious nights to spend in the Serengeti, so we decided to take advantage of this opportunity to try out a few different locations and camping options in the park. In this post, we’ll share what we learned, because, at approximately $300/person/day, you want every night of your “budget” camping safari to be as good as it can be, right?

Halisi Mobile-Tented Camp
For our first two nights in the Serengeti, we decided to splurge a bit and stay in a midrange mobile-tented camp. These are private campsites run by concessionaires in the park. For most of the year, these camps are located in the Seronera, the Serengeti’s busy central section, but, during the migration, they are able to relocate closer to the grassy plains where wildebeest and zebras pass in herds of thousands. What an incredible experience that would be! 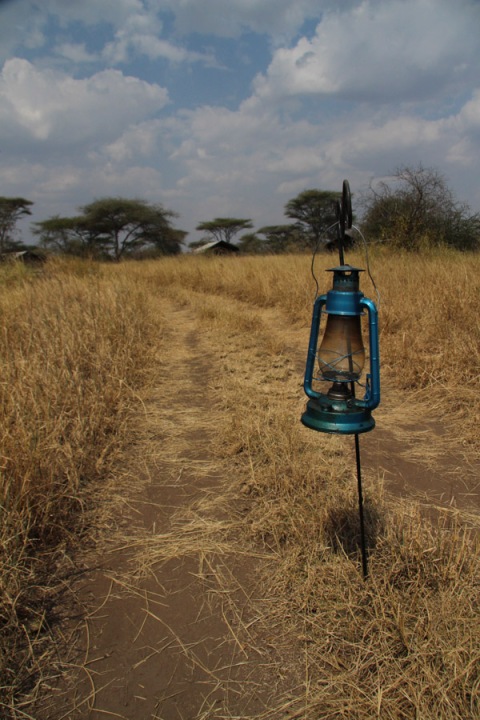 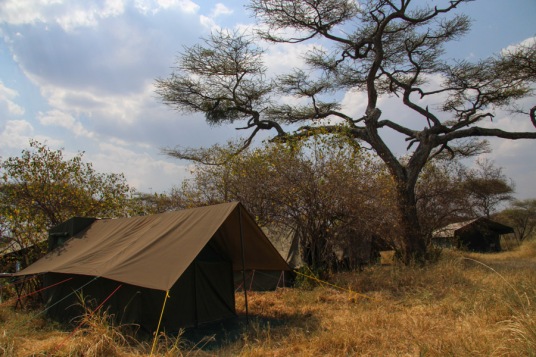 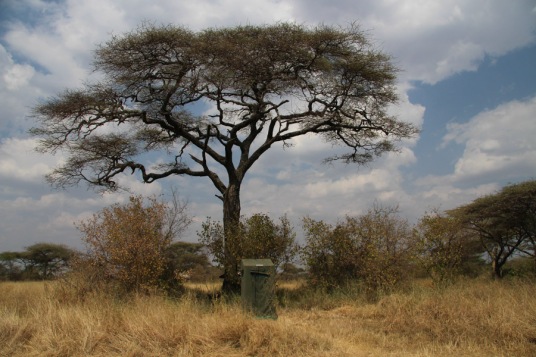 As far as lodging goes, we aren’t particularly fussy, but, after spending the first six nights of our safari in public campsites in Tarangire and Lake Manyara, both of us were eager to see what this upgrade had to offer. We were also pretty keen on avoiding Serengeti’s public campsite. When we stayed there on our overland truck trip in 2006, we remembered it being crowded, unloved and a bit scary after dark. (Our guides told us not to leave our tents under ANY conditions at night—hanging your bottom out of the tent door would have to suffice for a bathroom run if nature called in the middle of the night). So, for this trip, we were hoping to upgrade to something that a bit more luxurious but that also wouldn’t break the bank. Halisi was everything that we hoped for and much more.

Halisi Camp is located a few kilometers off one of the main roads in the Seronera. On our first night, we drove into camp during a glorious sunset and were greeted by a huge herd of Masaii cows (buffalo) just before reaching the tent area. 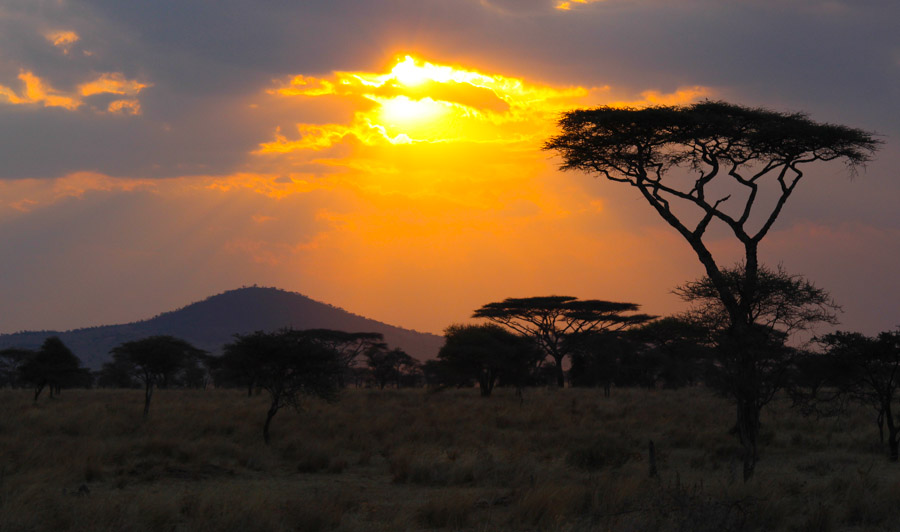 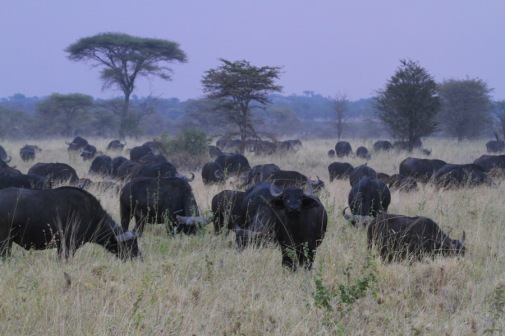 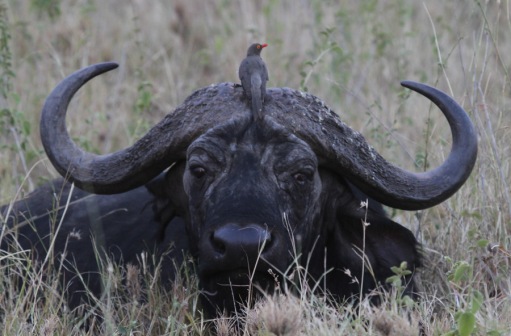 Although up to 32 guests can stay in the camp each night in the various semi-permanent tents, we were two of the only five guests staying in the camp that night. Upon our arrival, Paul, the personable camp manager gave us a brief safety orientation, reminding us that, like all campsites in the park, there were no fences to keep the wildlife out. He told us there was little to worry about, but he did stress that we would need an escort whenever we wanted to move about the camp, particularly at night when animals were more likely to wander through. We were given a flashlight and told to flick it on and off whenever we needed to attract the attention of the staff.

After being shown to our tent and given a briefing on how to use the solar-powered lights and the en-suite chemical toilet, we were left to unpack and relax for a while before dinner. Mattresses, sheets, towels, chairs, a table, oh my! We felt so spoiled by these small luxuries. 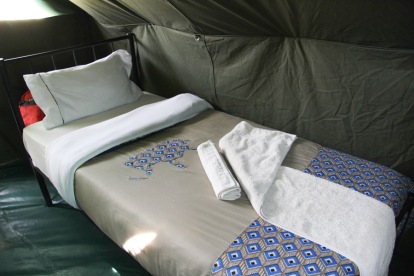 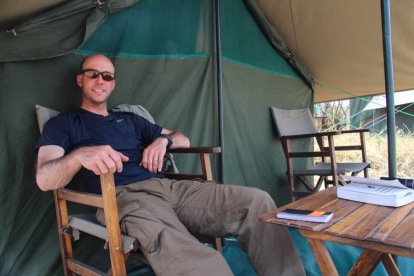 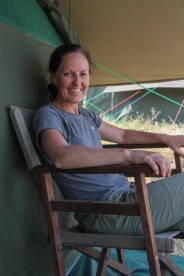 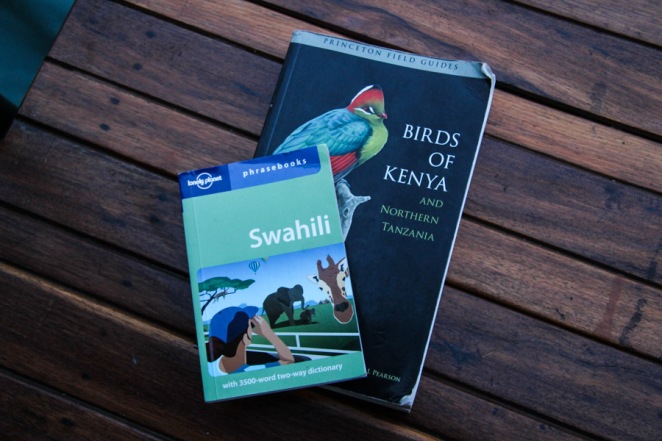 Before long, the camp staff arrived to fill the tank of our bush shower with hot water. Though simple and rustic, being able to wash off the layers of dust we had acquired from a full day of game driving was heavenly. See the photograph of Matt below? His smile says it all! 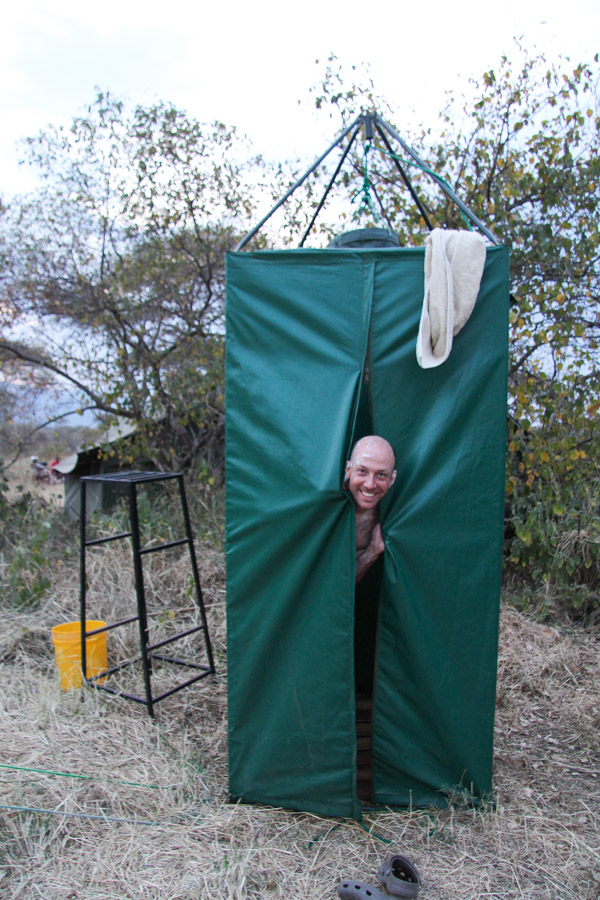 For dinner, we were escorted to the dining tent. All the meals served at Halisi were delicious and exquisitely prepared, and, again, we were blown away by the quality of food being served in such a remote location. 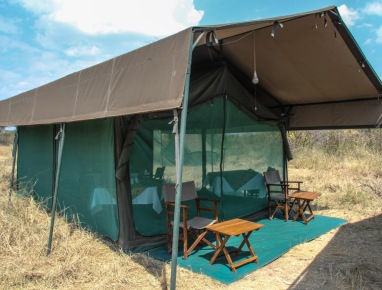 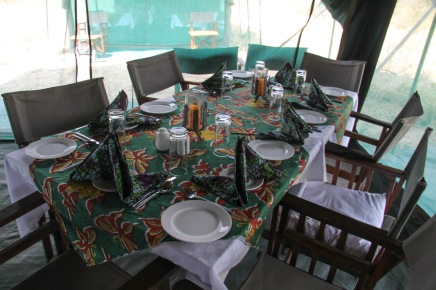 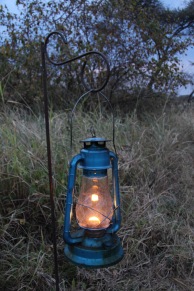 The camp also had a full bar with a small wine selection and cold beer available at reasonable prices. What more could we ask for?

A pride of lions right outside of our tent, that’s what!

On our first night at Halisi, we could hear the loud grunts of lions and the mournful howls of hyenas on the prowl in the vicinity of the camp, but our second night had an extra element of drama. Just like on night one, a large herd of buffalo migrated near Halisi right before nightfall. During dinner, the buffalo surrounded the camp, and the staff was kept extremely busy using vehicles to try to herd them away from the tents.

Halisi was full of guests on this second evening, and the dining staff encouraged us all to enjoy some “bush television” after dinner. Sitting around the  campfire, we were blissfully unaware of the drama being played out in the darkness around us. Eventually, the fire died out, and we all headed back to our tents for the evening. Since this was our last night of luxury, Matt and I decided to indulge in a glass of wine on our tent veranda before bed.

Before long, the camp manager came by and politely encouraged us to head into our tents after finishing our wine. Apparently, the pride of lions we had heard during dinner had attacked one of the buffalo and were in the vicinity of the camp. The buffalo was injured though not fatally, and the herd was surrounding it for protection. Paul said that we needn’t worry; he and the staff would be driving around the camp to monitor what was happening. And with that small opening, we managed to invite ourselves along for the ride.

Hearts pounding, we followed Paul through the camp and climbed into the truck. In our short drive around the perimeter of the camp we didn’t see the buffalo, but, in almost no time, we spotted a large male lion sitting just a few meters from the backs of the camp tents. Here is what Matt had to say about the experience once we were back in the “safety” of our tent:

What a sight just before heading to bed in our bush camp tent! With that experience, how could we not love our time at Halisi? We were sad to say goodbye.

Ikoma Campsite
As mentioned previously, we were dead-set on avoiding the public campsite where we stayed in 2006. So, for our 3rd night in the Serengeti, we headed to a small public campsite just outside the Ikoma Park Gate about 100 kilometers north of the central Serengeti. After Halisi, anywhere we stayed was going to be a let down, and our driver, Mansour, did a pretty good job of convincing us that we were driving away from where the majority of the animal action was during the dry season.

As we drove further and further away from Seronera, there were few opportunities for getting off the main road, and, we saw fewer and fewer animals. In fact, the wildlife highlight of the afternoon was visiting a hippo pool that left us wondering if we had made a wise choice in avoiding the central Serengeti’s public campsites. Watch the video below, and you will see what we mean:

We don’t have anything personal against hippos, but, after that sh*tty experience, we were left feeling a little down in the dumps (ha ha!).

Our arrival at Ikoma campsite didn’t improve things. The camp was quite small, and we were the only people there, confirming that sinking feeling that we had made the wrong decision to stay at this remote camp. Since there was little to see on the road up to the camp, we had arrived with plenty of daylight to spare and nobody to talk to. Even Mansour bailed, opting to take a bed in a guide room in the lodge down the road. After about an hour or so, another jeep finally arrived, and we chatted up the friendly young Brits who would be sharing the camp with us that evening. 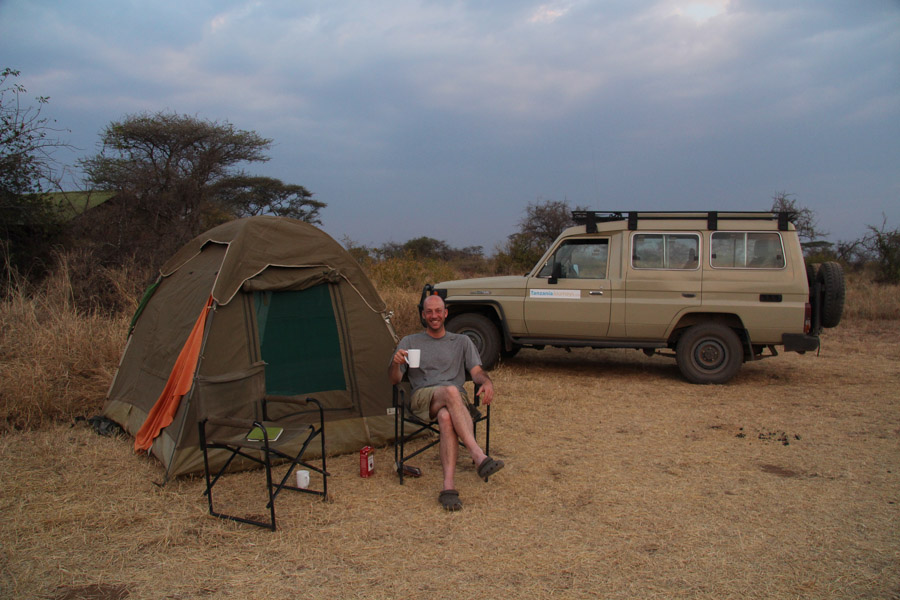 Even though we were officially outside the park, wildlife was apparently still a concern. As dusk fell, a trio of armed guards arrived to build a fire and watch over the camp until dawn. We took a shower, had a nice dinner courtesy of Mandela and headed to bed for an uneventful night of sleep. The camp itself was pleasant enough, but, as Mansour had warned, it was far from the animal action of the Seronera.

Seronera Public Campsite
In the morning, we decided to break camp and move back to the central area of the park a day earlier than initially planned. Putting up with the public campsites for an extra night would be worth it for the opportunity to see more wildlife. We were so happy that we made that switch. A lot had changed since our last stay in the Serengeti when it seemed like there was one large campsite for all of the campers in the park.

Since that time, the park has built several smaller complexes, each named after an animal in Swahili. We stayed at the Tumbili or Monkey Campsite. Facilities at Tumbili include a tiled mess shelter with caged windows to protect from animals (baboons, hyenas, etc.) while eating, solar-powered outlets for charging camera batteries, ablution blocks complete with running water, flush toilets, cold showers—but showers nonetheless!—a definite upgrade from the scary outhouse situation of our last visit. In addition, there were tons of camp birds to photograph, and, one night, we even had a close encounter with the diminutive African Scopp’s owl.

While not much to write home about (or photograph apparently because we didn’t take any pictures—sorry!), it was a vast improvement from our prior experience, and it just goes to show how delighted you can be when you don’t set your expectations too high—always a good strategy when you are on the road, no matter what the circumstances. In the end, we were pleasantly surprised by Seronera’s public campsites and would definitely stay there again. We shouldn’t have assumed that the park would not have made any improvements over the past several years. Next time, we’ll remember to ask before booking.

And the winner is…
Well, it probably goes without saying that Halisi was the favorite of our Serengeti camping options. It had a little bit of rustic bush luxury while still allowing us to feel like we were in Africa on safari. If we could do it all again, we might see if we could afford a mobile-tented camp like Halisi for all of our time in the Serengeti. If not, saving this splurge until the end of our experience would be the way to go.

10 thoughts on “Serengeti: Our Campsite Roundup”