Matt, June 2017
Life could not be more peaceful in the quiet hamlet of Valbona. The sun is shining as we make our way out to the pinewood gazebo for breakfast. Kola, the owner of Guesthouse Kol Gjoni, is up and moving about tending to the guests. He has an imposing presence but smiles through his thick mustache. I sense an intense pride in the life he has built for himself here in the mountains.

We eat breakfast al fresco and make enormous sandwiches for lunch on fresh baked bread baked fresh this morning in a large round aluminum pan cut into slices like pizza. It seems that almost everything is cooked in this same round pan here in Albania. 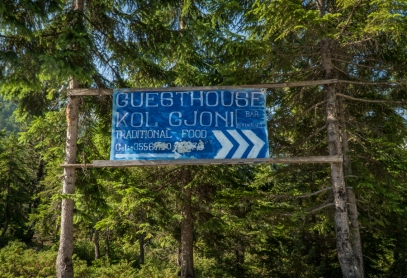 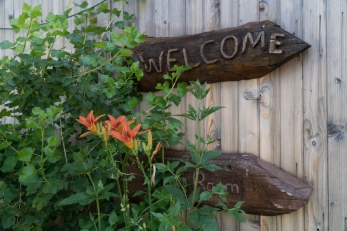 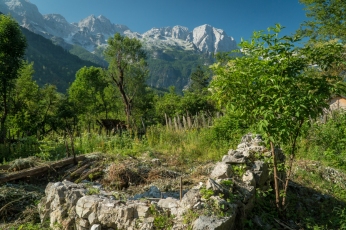 Before leaving, we say our good-byes to Adam and Yarcha who are taking the ferry back to Shkodra today. We will miss their company and wish them well on their continued journey. They are headed to the Adriatic coast in southern Albania next, and it looks just beautiful.

We finally hit the trail at 9. Again, it’s already quite warm. The shvitz is on! We walk down the road for a kilometer or two and see several igloo-shaped military bunkers placed strategically along the road. These are relics from Communist times when approximately 500,000 of them were placed all over Albania by the dictator, Enver Hoxha, to protect Albanian citizens from a foreign attack. 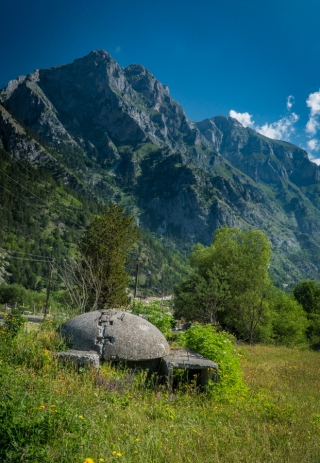 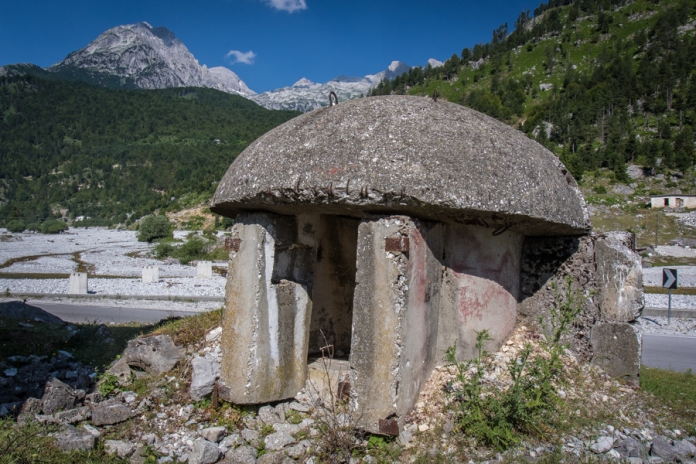 We start the steep 1200-meter climb straight up the mountain toward the first pass, Qafa Perslopit (qafa = “neck” in Albanian), and the hot sun is relentless. We find some sweet mercy in the form of shade in the forest on the way up and take the opportunity to take a break. Alison takes off her boots to take a look at her throbbing heels, which are starting to blister. She puts some eNZees wool in her socks in hopes it will help prevent some of the rubbing. 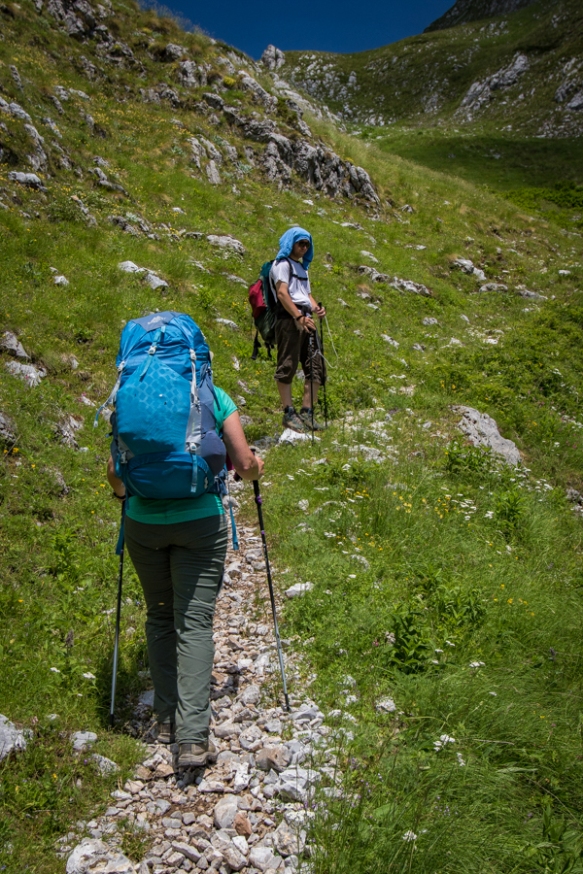 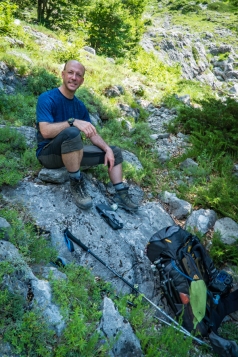 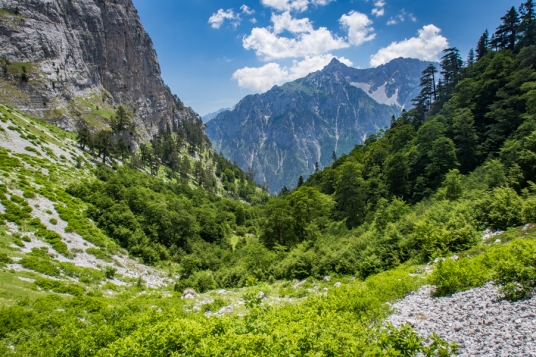 We walk through a meadow with ruins of a seasonal shepherd farm. Soon after, we are passed by three young German men, Niklaus, Moritz and Marius, who are hiking the entire Peaks of the Balkans trail. They are on their own and using a German trail guide to find their way. So far, they haven’t run into any problems. 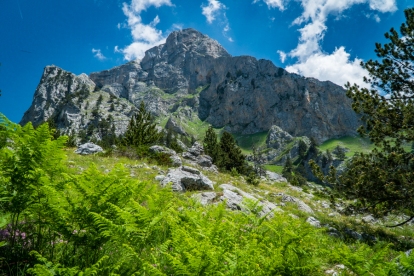 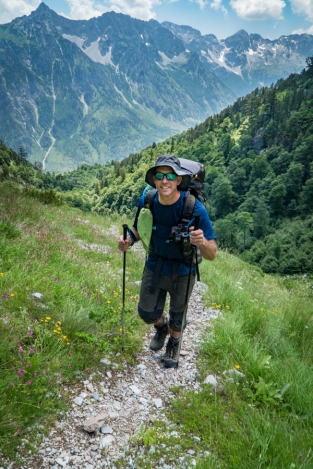 Once we get above treeline, we walk in a wide open meadow to the top of the pass. There isn’t really a trail here, but it is pretty obvious where we are headed, and there are occasional red and white trail markers indicating the way. The standard shape for the blazes is rectangular, but Adriatik tells us that they are circular when the trail gets more difficult. The trail may be getting more difficult, but we are too busy looking around at the gorgeous mountain views to take notice. The granite peaks of the Accursed Mountains are some of the most beautiful that we have ever seen, and here we are all by ourselves. Life is good! 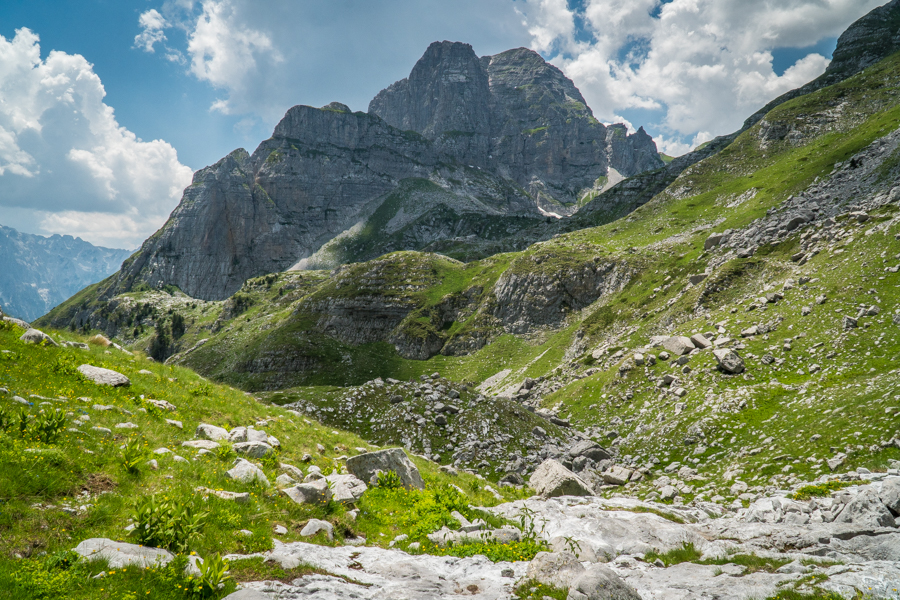 When we get near the top, Adriatik instructs us to drop our bags, so we can go see a cave. He runs ahead to scout it out and make sure that no animals are using it to escape the heat. Once the coast is clear, we join him inside and have some fun taking some photographs of the stunning alpine scenery framed by the cave entrance. 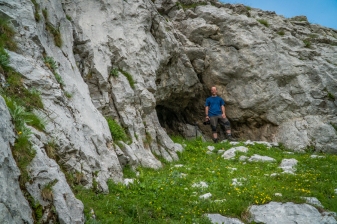 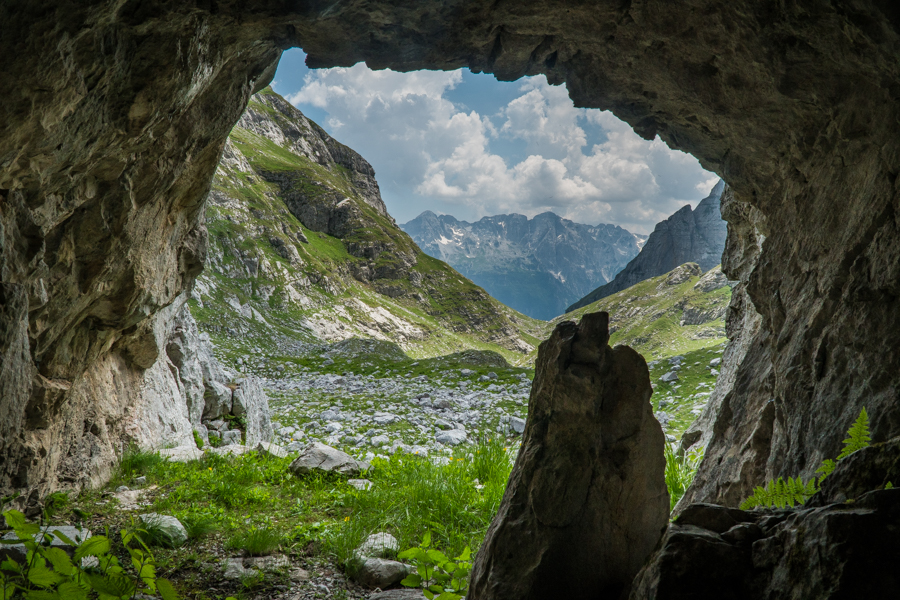 It’s at least another hour up to the pass from there. We skirt the edge of the mountain and keep climbing. Eventually we pick up a pretty well-defined trail, and the walking gets a little easier. 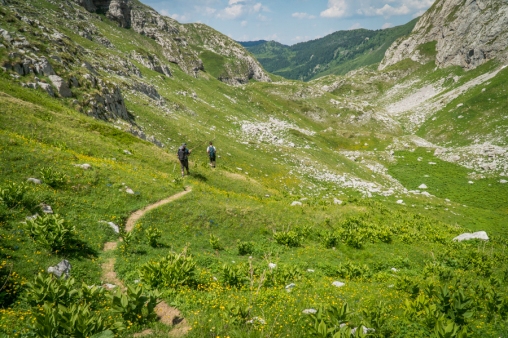 Besides the grand views, there are all kinds of interesting small things to look at, too. There are lots of beautiful flowers in bloom. We aren’t surprised to see grasshoppers in this high alpine meadow, but the snails creeping on the rocks throw us for a loop.

We make a stop by another small cave for a late lunch. Adriatik has been excited to show us this cave all day, promising us that we will forget about the intense heat the second we get near it. And he is right. There is a strong, freezing wind blasting out of the cave, and just standing near it makes us start to shiver. Brrr! 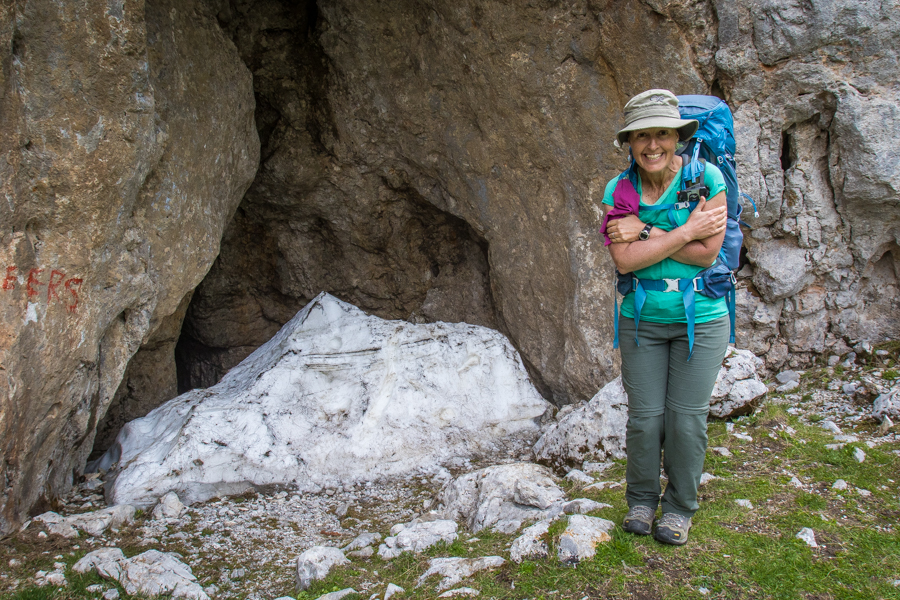 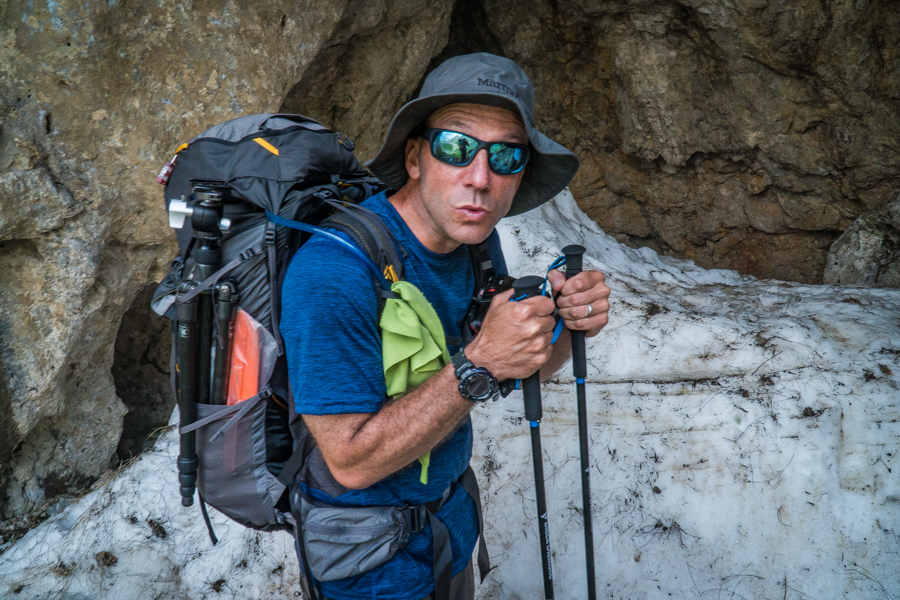 It is too cold to stay really close to the wind cave for long, but we drop our packs and sit nearby to eat our humongous sandwiches, giving new meaning to the notion of eating al fresco. Before we can finish eating, the sky turns dark, and rain and distant thunder threaten, forcing a quick end to lunch.

After lunch, there is a challenging section ahead where we have to pick our way down sharp, odd-shaped rocks to the base before turning right and heading up grassy slopes toward our second pass of the day. 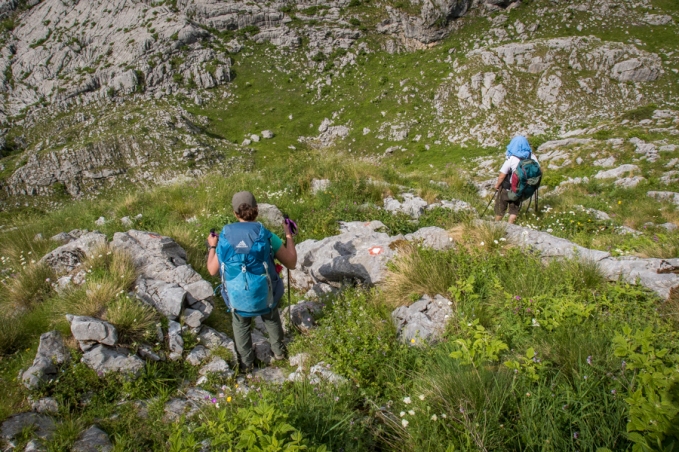 This pass marks the border between Albania and Montenegro, which was militarized from 1948 until early 80’s.

Adriatik tells us a story of the border closing way back in 1948 when everyone was warned to stay in the country or leave for good. Many of the villagers in the area where we are hiking now traveled between Albania and Kosovo to pasture their animals, spending their winters on one side of the border and summers on the other. By the time the news of the border closing traveled to this remote region, it was too late, and some families were stuck on the opposite side or even split apart for almost four decades.

Not too long ago people avoided the border crossings for fear of being shot. Today we walk across the unmanned border without incident.

The next section of trail is filled with beautiful flowers, and we stop for a long water break at a creek (turns out we were all out of water!). We come to a creek and cool the dawgs, fill up on water and eat an apple we picked up from the guesthouse for a snack. We see a small herd of sheep, and Adriatik impresses us by catching a young lamb to hold and pet for awhile. It turns out that he has a soft spot for animals, which makes us like him all the more. 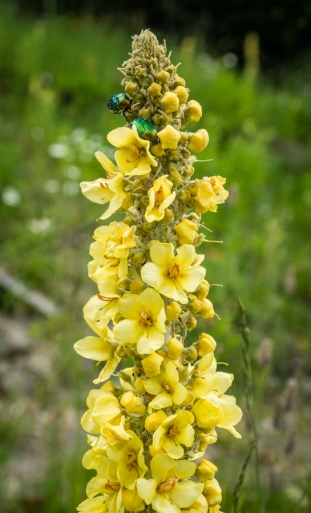 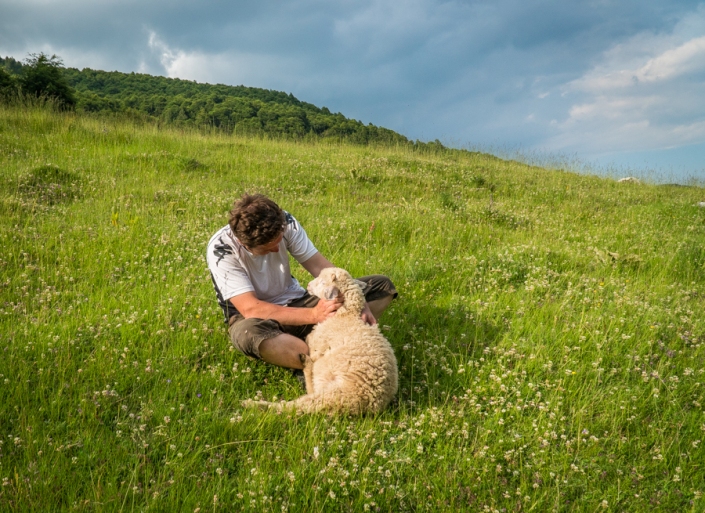 We feel rested and ready to tackle our last leg of this long trek to Çerem. We cross a meadow near a farm, and everything seems idyllic until we run into a sheep dog who got an A+ in his “Stranger Danger” class in guard school. He barks and barks and will not let us pass. We try to veer away from him, but he pursues us.

Adriatik responds by acting aggressively and throwing rocks near the dog, which finally gives us the opportunity to scoot by. Even when we are well past the farm, the dog keeps coming, now from behind. We are definitely happy to have Adriatik’s help with this unnerving situation. Once we finally get clear of the dog, we drop down into the forest and take a short break at a shepherd’s campsite. The peace and quiet feels so nice. 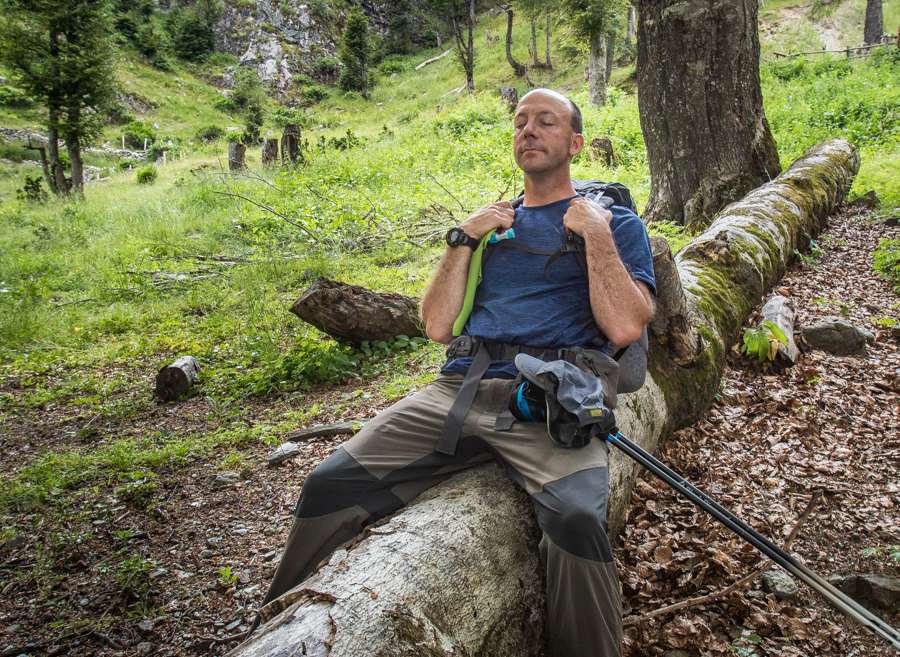 Within minutes, the rain starts up again, and this time the thunder and lightning are very close. At first we resist putting away the cameras and pulling out pack covers and rain gear, but soon it begins to rain heavier. When the hail starts to fall, we are forced to gear up for the weather, and we walk for several kilometers in a downpour. It’s a relief when the storm finally lets up.

The final stretch is through a lush forest with a river of mud that has started to flow along the trail. Armies of flies swarm us, and they seem to be attracted to Alison’s red raincoat in particular. We pick wild strawberries as the rain subsides. The tiny berries taste like the distilled pure essence of strawberry, and we can’t get enough of them.

We walk down into Çerem village and arrive at our guest house soaking wet, but we are in luck. The kitchen/dining room is warm and heated by the stove they use for cooking, and we are encouraged to hang our stuff in the room so it can dry out.

The woman who runs the guesthouse is very pleasant and welcoming. It turns out that her 80 year old mother-in-law was one of the folks forced to stay in Albania in 1948. She is quite pleasant and intent on feeding us loads of fresh food and mountain tea. We spend time chatting with the other hikers here who include the three Germans as well as James and Lizzie (the German couple who will eventually give Alison a lift). Life is exceedingly quiet in this quaint little village as the sun goes down.

2 thoughts on “Peaks of the Balkans, Day 2: Valbona to Çerem”