Matt, July 2017
Sleeping at Florian Guesthouse proves to be a challenge for several reasons. The family dog starts barking incessantly at 5 am and just won’t stop no matter how much we will him to from our stuffy, little room. At 6 am, we are woken by the sound of a hard rain and jump out of bed to go grab our laundry which is hanging out in the yard under the grapevines.

One of Florian’s sisters is already up trying to salvage our drying clothes. We thank her profusely and drape the damp items on the backs of the benches under the covered eating area. We climb back into bed and sleep in fits for another two hours before lazily getting up to shower. We finally emerge and announce ourselves for breakfast around 9:30. The place is quiet. Everyone else has been up for hours at work on the day’s chores.

Breakfast arrives slowly, but this gives us time to pack up and make our plan for the day. We decide to forego Florian’s offer to give us a day tour and see a bit of Shkodër on our own. We agree on a price for a taxi that will take us to the Rozafa Castle, wait for us and then drop us in the center of town.

The castle, which has been used continuously since at least the 2nd century AD, is in remarkably good shape and affords us views of the entire region. We can see all of Shkodër, the lake on which it sits and the two rivers that emanate from it in addition to several mosques. And with the backdrop of the Dinaric Alps in the background, it’s a scene worthy of royalty. 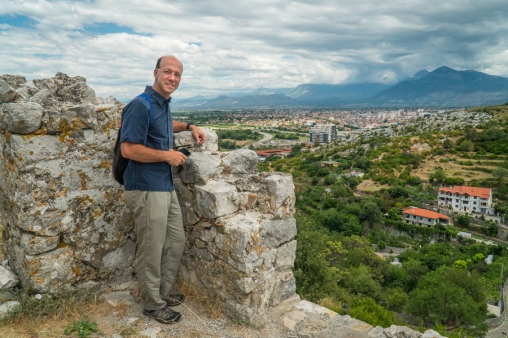 Despite the fairy tale view, the castle has somewhat of a dark history. Legend has it that the castle was named after the wife of one of the three brothers who built it who was sacrificed and buried within the castle walls. 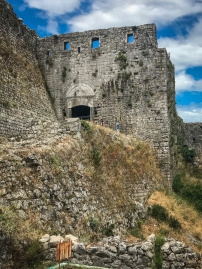 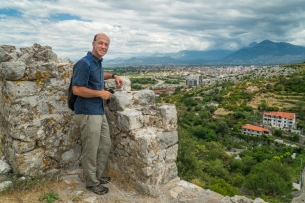 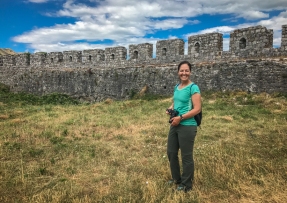 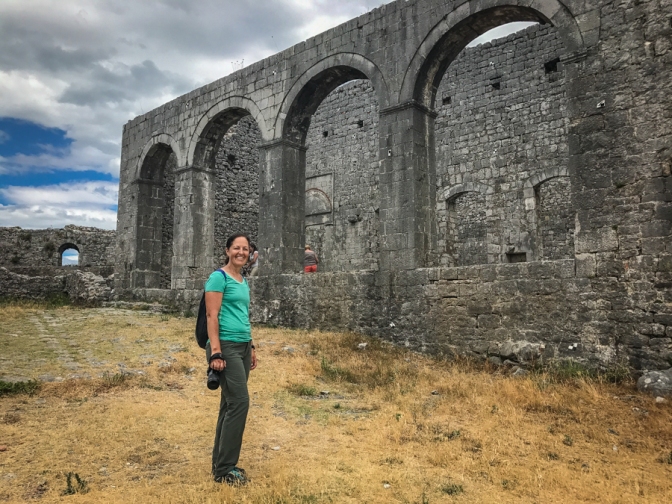 After strolling the grounds, we have our taxi drive us back to the city center where we enjoy an hour’s stroll around the center, stopping by the mosque, peeking in shops, buying a piece of burek for a light lunch and then stopping for a coffee to people watch in the pedestrian area. The temperature is pleasant, and it’s nice to stroll leisurely without bags or boots for a day. 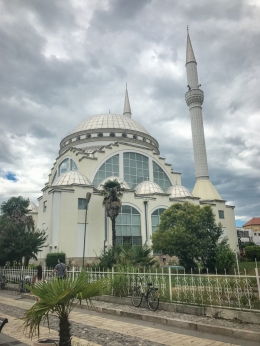 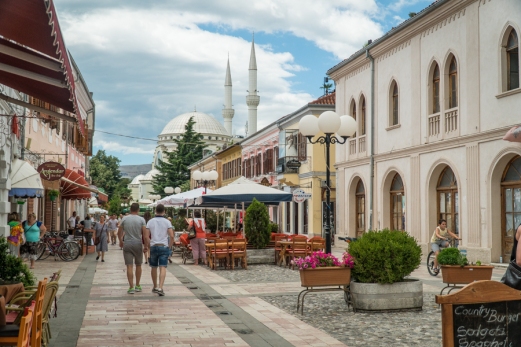 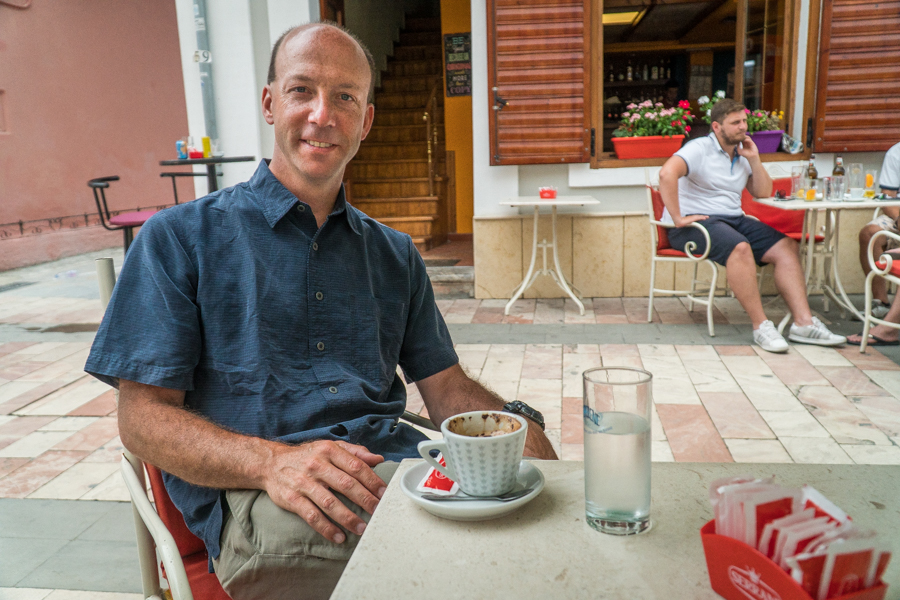 Soon we taxi back to the guesthouse where Adnan is waiting with, not one, but two(!) different taxi drivers to take us on to Tirana. Wires somehow got crossed with Adnan and the office back in Kosovo, and now Florian is making it clear to us that we have overstayed our welcome. Another set of guests has arrived for a cooking class, and he wants us out of here. Without further adieu, we are on our way. But first Adnan must sort things out with the taxi drivers…

The taxi to Tirana only takes about an hour and a half. We quickly drop our bags at the hotel right next to the airport and continue on to the center where we bid a final goodbye to Adnan. He will meet some friends for coffee before catching the bus back to his home in Pristina.

We have a few hours to explore the center of the capital in the late afternoon. Our first destination is Skanderbeg Square, a large open plaza paved in granite surrounded by cultural monuments, including a large equestrian statue of Albanian national hero Gjergj Kastrioti Skënderbeu, the National Opera with a huge flag of Albania waving in the wind, the National Museum with a giant historical mosaic depicting figures from Roman times through at least the Ottoman period and the Et’hem Bey Mosque. 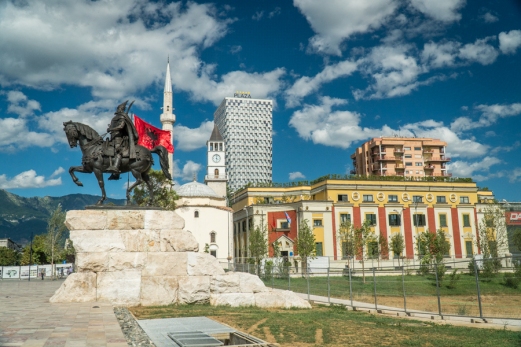 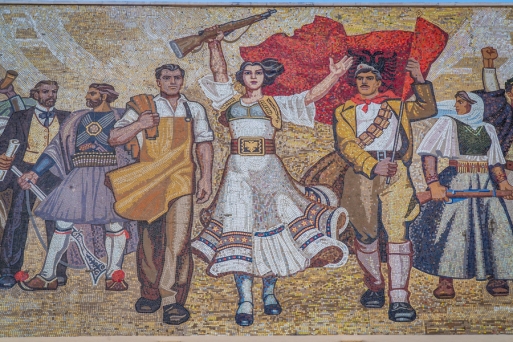 There are fountains spouting from the pavement, and one boy is joyously running through them exactly as I used to run through sprinklers to cool off in the summer when we were kids. We stroll around taking pictures and people watching. The sky is impossibly blue today and the temperature, while warm in the sun, is still quite pleasant.

We stop into the mosque, take off our shoes and admire the frescoed interior. We are curious about the number of clocks both in and outside the main prayer hall, so I venture to ask someone a question. Three men surround me, eager to help. The clocks announce the time for prayers which occur 5 times per day. The mosque dates back to the 12th century, and, a few days ago, on the last day of Ramadan, the entire square outside was filled with the faithful all praying together. 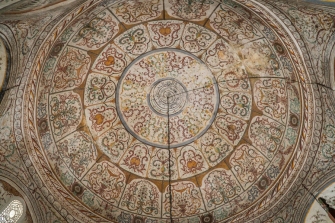 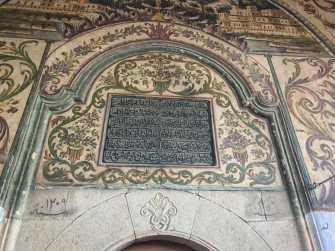 One gentlemen in particular, Mehmet from Turkey, and I speak at length about Islam and the power of praying communally. I tell him about attending mass with Pope Francis in Rome a few weeks ago and making the short pilgrimage from San Giovanni Laterano to Santa Maria Maggiore. He told me that the Koran says that when you pray together with other people, your prayer is 27 times more effective.

We both agree that the world is a better place when people pray together. It is one of those life-affirming conversations that remind you that the media’s portrayal of Islam misses the majority of people who are simply living a peaceful life.

Ironically, when I walk out to find Alison, she is engaged in a controversial conversation about American politics with an older Albanian gentleman who insists that Trump is a good person (Just look at the Dow Jones! Why do you think it is up?) and flummoxed by the fact that Hillary Clinton is not in jail. They agree to disagree respectfully, and again, I note how much the media influences perception.

We walk a bit outside the square to see what looks like the Communist-era version of Jeanne Gang’s Aqua building in Chicago and then step inside Bunk’Art, a new museum re-purposed from one of Enver Hoxha’s concrete bunkers. 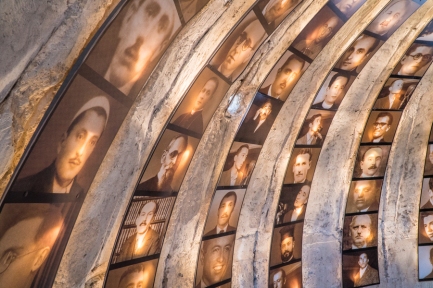 Our last stop is a quick visit to the modern Christian Orthodox Cathedral. The building is all curves and arches, and the smooth gold and white architecture shows off well against the brilliant blue late afternoon sky. 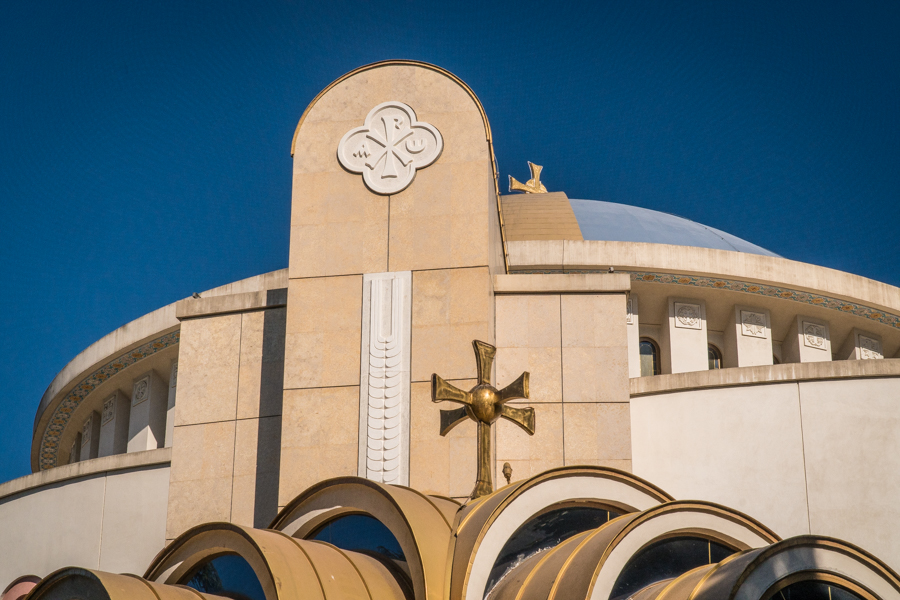 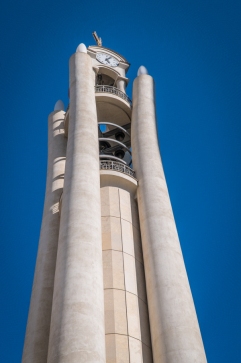 From there we wander past Taiwan Park and across the river (really a concrete canal) into a neighborhood just outside the center. We stumble into a few pharmacies looking for blister first aid materials with limited success, so we turn our focus to food. We are hungry and decide to stop for an early dinner. One of the pharmacists recommended a restaurant nearby that serves traditional Albanian food, and we are eager to have some more of the delicious cuisine one last time.

We enjoy a mixed platter of warm and cold appetizers along with a cabbage and red pepper salad and wash it down with a cold draught Birra Tirana. The food is reasonably priced, and we pay $15 US for everything. It’s a perfect final meal except that I have a taste for baklava. We find a place around the corner called Akropol and determine that, with a name like that, we can’t go wrong. We share one delicious piece—all drenched in honey—decide it would be a wise idea to walk off the meal a bit before catching a taxi back to the airport hotel.

Back at the hotel we quickly pack our bags for airline travel and stop down to the hotel bar for a beer on the veranda while we catch up on some writing before heading to bed. We have an early flight back to Rome and then on to Geneva, so it’s time to call it a night. We have enjoyed our first foray into the Balkans and hope to come back again to explore further.

One thought on “A Fond Farewell to Albania”